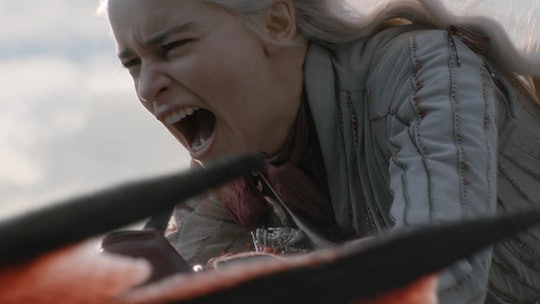 No one touch me, because I'm in pain. Daenerys Targaryen is dead and while everyone knew her demise was in the cards following the fifth episode of the final season, fans reactions to Drogon on Game of Thrones make it clear that no one was ready to watch him say goodbye to the Mother of Dragons.

In the finale, titled "Game of Thrones 73," Daenerys was killed by Jon Snow after having a conversation about her fiery attack on King's Landing. Drogon — being the perfect son that he is — knew immediately that there was something wrong, and emerged from the shadows, where he found his dead mother in the arms of her lover/ nephew. Although it looked like Drogon was going to have himself a piece of Jon Pie, the dragon didn't kill Jon and instead, unleashed his dragonfire on the Iron Throne, promptly destroying it for good. He then took Daenerys' lifeless body and flew away to the east.

Although fans were saddened Daenerys' death, Drogon's final farewell on Game of Thrones was overwhelmingly devastating. Not only did Drogon lose both of his brothers, he lost his mother, too. And no, I will not simply get over it.

Understandably so, other fans were left reeling over Drogon's loss. And quite frankly, I don't blame them for their anger.

Meanwhile, other fans faced the moment with fun and humor.

Fans also seemed to be a bit confused as to why Drogon decided not to kill Jon. Some fans revealed that they were waiting to watch the dragon burn Jon to a crisp.

However, in the midst of all the tears and emotions, fans were able to connect all the dots in regards to Drogon and Daenerys' final moments together. While it might be surprising that Drogon didn't kill Jon and chose to go after the Iron Throne instead, people shared that Drogon didn't blame Jon for the death of his mother. He blamed the Iron Throne. But in the end, Drogon completed his mother's goal — he broke the wheel.

On Twitter, a fan wrote, "I think the most meaningful part of the entire #GamesOfThrones finale is when Drogon burns down the Iron Throne. He’s not mad that Jon killed her. He’s mad that her desire for the throne got her killed."

While Game of Thrones seemed to have a poetic ending prepared for Drogon, there was one loose end that has yet to be tied. Where exactly did Drogon take Daenerys?