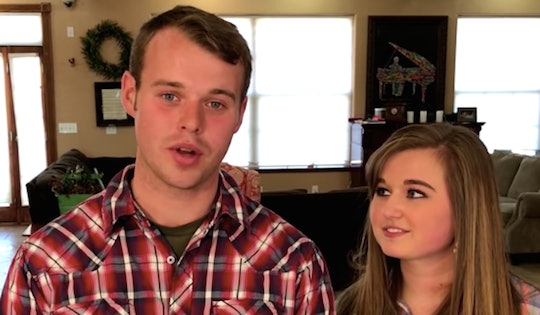 Once a Duggar gets married, they typically don’t waste any time getting pregnant. Joy-Anna Duggar announced her first pregnancy just two months after marrying Austin Forsyth in May, while Jill Duggar and Jessa Duggar both revealed their baby news within a few months of their weddings. Have you noticed a trend yet? Yep, the Duggars typically start their families ASAP. So, it’s only natural that fans are wondering when Joseph Duggar’s wife, Kendra Caldwell, will announce a pregnancy. Joseph and Kendra recently got hitched on Sept. 8, and Counting On viewers have been paying close attention to their recent photos for any pregnancy signs. In fact, some fans are convinced Kendra Caldwell is pregnant at this very moment, and their suspicion hinges on an interesting family picture recently shared to Paul and Christina Caldwell’s Facebook page.

On Friday, Kendra’s parents, Paul and Christina, updated their Facebook page’s cover photo with a sweet family portrait. The picture includes Joe, Kendra, Paul, Christina, and the six Caldwell siblings. At first glance, it looks like there’s nothing seemingly suspicious or amiss with the photo. If you’re a Counting On sleuth, however, it’s very clear that there could be something a little off with the new cover photo. Some fans quickly pointed out that Kendra’s body is obscured by her mother and siblings, and that this pose might be purposeful. Translation: some people believe Kendra is sporting a pregnancy bump, and that the Caldwells are intentionally hiding the evidence.

Here’s the photo in question:

Shortly after the photo was posted, fans took to Reddit to discuss the possibility of Kendra being pregnant. “Is it a coincidence that Kendra's whole body is behind her mothers? If they want hide a pregnancy...they've done it well since you can't see Kendra at all," one commenter wrote. Another added, “the fact that Kendra has her entire body blocked by her mother is making me suspicious already.”

So, is there a chance that Kendra *might* be pregnant? If Kendra conceived on her wedding night or shortly thereafter, she would be almost three months along. Of course, if she is expecting, there wouldn’t be much of a bump to hide. On the other hand, Joy-Anna sported a sizable bump in her pregnancy announcement, and she was only two months along at the time. It goes without saying that every pregnancy is different, so it’s hard to speculate as to what Kendra’s supposed bump would look like at this point.

Another obvious possibility here is that Kendra simply is not pregnant. It’s more than likely that the Caldwell family could be lacking in the photography department, and it goes without saying that a lot of people don’t know how to properly pose family portraits. One commenter on Reddit argued, “It looks awkward. Whoever positioned them really didn't do a good job.” Another fan said: “I think it is just a poorly composed photo … a better photographer would have been able to find a way to put the parents at the very front while having Joe and Kendra somewhere in the centre without it looking like Kendra is being hidden.”

So, yeah. It’s my personal feeling is that Kendra currently doesn’t have a bun in the oven. That being said, I wouldn’t be surprised if Joseph and Kendra announced a pregnancy sometime in 2018.

Either way, Kendra and Joseph deserve privacy and respect as they navigate their first year of marriage. Although it's understandable why fans are excited about the possibility of another Duggar pregnancy, it's a little much to speculate on every new photo and video of the pair. If Kendra is pregnant, she and Joseph will make the announcement when they're ready.