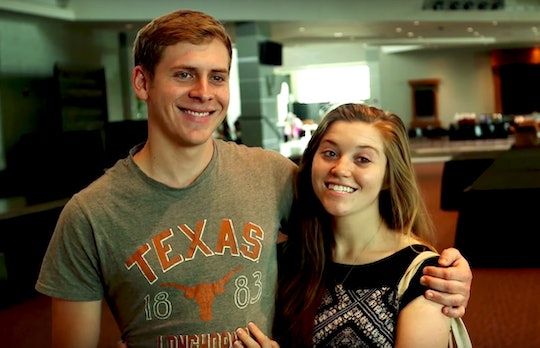 Joy-Anna Duggar Is Pregnant, & She Is So Excited For Motherhood

The Duggar family is growing again. It can be hard to keep up with who has a baby on the way given the recent spate of Duggar engagements, weddings, and births in the last year, but this time it's daughter number nine with the latest good news: Joy-Anna Duggar is pregnant with her first child, according to People. Duggar's father Jim Bob teased Joy-Anna's pregnancy announcement to OK! back in July but the Joy-Anna has finally confirmed the news for themselves.

Joy-Anna's baby will bring the total number of Duggar grandchildren to an amazing 10. According to Jim Bob, the more the merrier, as he mused to OK! that if each of his 19 kids each have at least five kids of their own, he'll be a granddad to nearly 100 grandchildren. Dude, talk about squad goals.

Speaking to People, Joy-Anna could barely contain her excitement at sharing their news.

We’re so happy and thankful to announce that we’re expecting a baby! Every child is such a precious gift from God. I’m most looking forward to watching Austin as a dad and raising children together with him. I have a lot of good memories of my mom teaching us and the quality time we spent together, and I’m really looking forward to doing that with my own children. It’s such an amazing thing to be a parent and raise children!

Joy-Anna and Austin began their courtship sometime in August 2016, according to Inquistr. The Duggar family has pretty strict rules when it comes to dating, engagement, and marriage, according to their particular faith. After a brief courtship, Joy-Anna and Austin announced their engagement in May, followed by their fairytale-like wedding just two months later — the pair were originally planning to get married at the end of October. In front of nearly 1,000 guests, the two got married at Cross Church in Rogers, Arkansas.

While Joy-Anna likely isn't due until sometime in 2018, it's been quite the year of baby news for the Duggar family. In February, Jessa Duggar gave birth to her second child and in July, older sister Jill Duggar gave birth to her second child. Oldest son Josh Duggar is also expecting his fifth child with wife Anna, due sometime soon, although they've kept their fifth pregnancy largely under wraps this year. And it looks like 22-year-old Joseph Duggar is the next Duggar child up to the altar, proposing to girlfriend Kendra Caldwell at Joy-Anna's wedding.

Whew! There is a whole lot going on for the Duggar family as of late — suddenly the Kardashian family doesn't feel so big by comparison. Congrats all around for Joy-Anna and Austin.