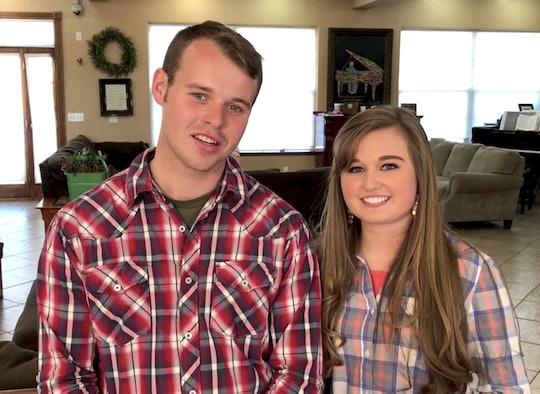 Looks like there's another wedding on the books for the Duggar family. According to PEOPLE, Joseph Duggar is engaged to his girlfriend Kendra Caldwell. The 22-year-old and seventh oldest Duggar child popped the question at a rather unexpected and unusual place: His younger sister Joy-Anna's wedding to fiancé Austin Forsyth on Friday. Joseph Dugger and Kendra Caldwell started their courtship only this past March, according to a video posted at the Duggar family blog. The pair met through church, where their families are "close friends," Duggar told Us Weekly.

But let's get back to that whole proposal scenario, shall we? Typically, proposing at a wedding is seriously poor form. Wedding mag Bridal Guide suggests proposing at someone else's wedding is really only acceptable if the bride and groom are okay with the proposal happening during their own special day.

Thankfully for Joseph, he ran the idea by his younger sister Joy Anna and her then-fiancé Austin Forsythe, according to Entertainment Tonight. "I asked Joy and Austin a few weeks ago if they would mind if I proposed to her at [their] wedding," Joseph said in a video announcement for TLC. According to Joseph, Joy Anna and Austin were thrilled at the idea of a wedding proposal at their own wedding.

The move from courtship to engagement comes with some upgraded relationship benefits for Duggar and Caldwell. The Duggar family rules of courtship mean that hand holding is now permitted, according to Duggar patriarch Jim Bob in an interview with TODAY.com in 2014. As Caldwell notes in their engagement announcement video at TLC.com, the couple is also now permitted to say "I love you" to each other. But kissing — and pretty much any other form of physical affection — is still off limits: They'll have to wait until their wedding day to have their first kiss.

There's no denying that the Duggar family courtship and engagement rules are strict, but it's worked so far for the five Duggar children that are now married. It's clear the third-oldest Duggar son and 19-year-old Caldwell were beaming with excitement about what the future holds, with the biggest grins ever in their announcement video.

The couple hasn't yet officially announced a wedding date, but 2017 has already shaped up to be an exciting year for the Duggar family so far: Joy-Anna just got married, Jessa Duggar gave birth to her second child with husband Ben Seewald in February, and sister Jill Duggar is pregnant with her second child, due sometime in July.

Congrats to the happy couple: Their engagement will feature on the new season of TLC's Counting On, which premieres on June 12.