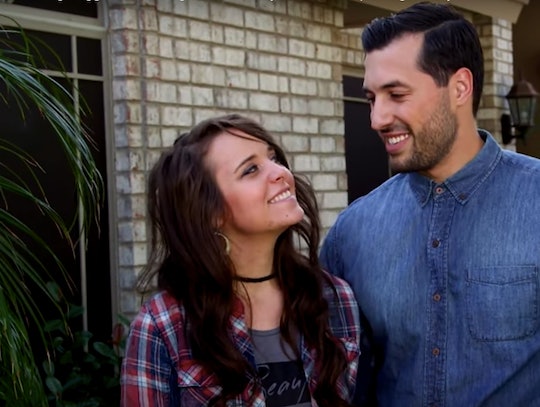 Honestly, I think that there's a legitimate baby boom happening right now. Maybe it's just me, but my newsfeed is full of former classmates and family members all announcing that they're expanding their families. Even reality television stars like Counting On's Jinger Duggar-Vuolu and Revenge Body host Khloe Kardashian are among the baby boomers. And with every little update about this exciting news, fans are legitimately losing it, as they did with a new photo they're convinced shows Jinger Duggar-Vuolo's "baby bump."

Jinger and her husband, Jeremy Vuolo, only announced that they're expecting their first child a few weeks ago, via their blog on Jan. 3. And news that the happy couple, who have been married for a little over a year now, would soon be parents spread quickly. Needless to say, fans are ever so eager for updates on her pregnancy and fans hope every photo either of them post will let them in a bit on this exciting journey.

Earlier this week, Jeremy uploaded a photo to his Instagram that featured Jinger — along with himself and Todd Friel, the host of Wretched Radio, an evangelical Christian radio show — and fans are quite simply convinced that they can see her growing pregnancy bump in the photo. "Bump! 😍😍," one fan commented. Another fan asked, "Do I see a tiny baby bump??"

One more wrote, "Awwww now I see I little bump!" And yet another follower commented, "I see a bump!! So happy for you both!"

I guess I understand why some fans might think that they see a bump. She is pregnant and wearing a loose dress and a bump could be under it. I get it. But, also, had Jinger and Jeremy not confirmed that they are indeed expecting a baby, this photo could very well pass as just an average snapshot of the couple given the nature of her dress and the fact that bumps come in all shapes and sizes. Either way, fans are clearly incredibly excited to see a new photo of Jinger that may or may not show a hint of a bump.

Neither Jinger nor Jeremy has actually revealed when their bundle of joy is expected to arrive, although fans have their theories about her due date. Still, it's impossible to say just how far along she is, exactly. However, most women wait until after their first trimester to announce that they're pregnant, since that's when the chance of miscarriage significantly decreases, according to Healthline. So, it's pretty likely that Jinger is well into her second trimester, which makes it a bit more understandable that fans want her to share a photo of her pregnancy progress.

While this latest photo may not be a definitive bump pic, one will likely follow sometime in the future. Their pregnancy announcement was pretty sweet, so the first official photo should be too, if they decide to share that with their fans.

Truly, the Lord’s mercies are new every morning! Now, the journey has taken an exciting turn: we are expecting our first child! We are praising God for this beautiful gift and ask that you join us in praying for a safe and healthy pregnancy.

Jinger and Jeremy are clearly totally fine with sharing their lives with their fans, considering the fact that they're on a reality show, Counting On, and are both verified Instagram users with thousands of followers. So while fans may think they see a hint of a bump, Jinger will likely share any further pregnancy updates when she's ready — just like she's done so far.