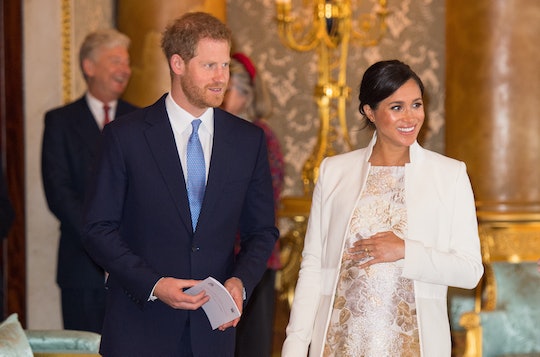 It's probably not weird to want to be able to wish the Duke and Duchess of Sussex well when they welcome their baby right? I mean, it's not like I expect them to let me into the delivery room (unless that offer is on the table in which case I am 100 percent in). But after watching their love story unfold on social media and on television, I don't think it's out of the ordinary for fans to feel invested. Well, it turns out that fans can wish Meghan Markle and Prince Harry congratulations when their baby arrives, and better still they might even get a response.

The Duke and Duchess of Sussex are expecting their first baby within the next month or so, and, of course, most of the pertinent information has been kept under wraps. We don't know what the sex of the baby is at this point, for instance, nor do we know the exact due date beyond a shadow of a doubt. But, fortunately, we do know how to wish the couple and their little royal baby well when he or she arrives. And perhaps unsurprisingly, you will have to send them your congratulations in a truly old school way... write them a letter.

As People reported, you can write the couple a letter and send it to:

I suggest getting as creative as possible to really get noticed, since you know there are going to be mountains of congratulatory letters. Sure, you could try just a simple card with a nice note. But why not pay homage to Markle with one of her own inspired ideas? Write a letter on a banana as she did back in February when paying a visit to charity One25 when they were organizing food for Bristol sex workers, as per Hello!

Although I'm not sure where you'll affix a stamp.

Clarence House is actually the official royal house of Prince Charles and Camila Parker-Bowles, the Duchess of Cornwall, but that's where the Duke and Duchess of Sussex are currently accepting mail (perhaps once their royal household is properly set up, that will change). And whether you decide to send a message via banana or just in a letter, you're going to want to include your return address. Because it seems Prince Harry and Meghan Markle have been known to respond to fans' well wishes in the past, as they did after their May wedding next year, as per People.

Now I have a feeling you won't be getting a personalized greeting or anything, although one can dream. But you could get a candid photo and an envelope with the stamp of their royal house, just as fans did after their wedding, per Ireland's Independent.

And this time around, that candid photo could very well include a picture of the new royal baby. I'm starting to really warm to this old-fashioned idea of using the mail instead of social media.

At least when I correspond with the royal family, at any rate.