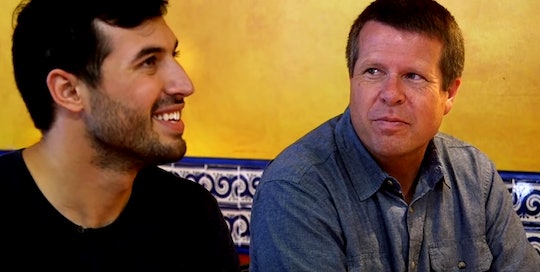 It's no secret that Jinger Vuolo has made a name for herself as something of a "rebel" in the super-strict Duggar family. Ever since she married her husband Jeremy Vuolo in 2016, Jinger has been making very different choices from the rest of her family. And while her sisters have all made it perfectly clear they support Jinger and remain in her life, what about her parents? Some fans think Jim Bob Duggar has "shunned" pregnant Jinger, and here's their evidence.

(Neither Jim-Bob Duggar nor Jinger Vuolo immediately responded to Romper's request for comment.)

The Duggar family sparked rumors of problems with Jinger and Jeremy when Michelle and Jim Bob took the family for a trip to Texas; Jinger and Jeremy live in Loredo, but Jim Bob and Michelle didn't appear to visit them. That struck some fans as incredibly suspicious, considering Jinger is pregnant with a baby girl and is the only one of the married Duggar daughters to live anywhere but their home state of Arkansas. Of course, it's perfectly possible that Jim Bob and Michelle did, indeed, visit their daughter and simply didn't document that part of their trip. Jim Bob and Michelle did choose to share a picture of their visit to Magnolia Market, which Chip and Joanna Gaines built in Waco, Texas, on Instagram. A place Jinger and Jeremy also recently visited, according to their social media. And, as one fan noted in the comments; "Did you guys visit jinjer? Seems like y’all shunned her from the family." Other fans repeatedly asked if the family visited Jinger during their holiday, but there was no comment from the Duggars.

It does seem like rather an unusual coincidence, but is that really enough to make assumptions about Jim Bob cutting off contact with Jinger? After all, a scroll through the Duggar family Instagram feed offers proof that Jinger was once a regular, beloved fixture on the family's social media platform. But perhaps all of her so-called "rebellions" have caused some tension in the family. These rebellions include big Jim Bob Duggar no-nos like wearing pants, skirts that are above the knee, heels, and sneakers. The Duggar family has long touted modest dressing, as Duggar daughters Jana, Jill, Jessa, and even Jinger explained in their book, Growing Up Duggar, according to Cosmopolitan:

We do not dress modestly because we are ashamed of the body God has given us; quite the contrary. We realize that our body is a special gift from God and that He intends for it to be shared only with our future husband.

Jinger doesn't just rebel against the dress code; Jim Bob was reportedly not a fan of Jinger's move away from the family compound in Arkansas either, a fact he didn't bother to hide when the couple was still courting in 2016 and Jim Bob grilled Jeremy during an episode of Counting On. He told Jeremy he was worried about how he would provide for Jinger's "expensive" thrift shop spending (perhaps he doesn't know what thrift shops are?), and Jeremy's response was polite silence. Perhaps already letting Jim Bob know things were going to be different.

Jeremy and Jim Bob have reportedly disagreed on religious doctrine at times as well; Jeremy is a pastor and considered to be more liberal than his father-in-law when it comes to spirituality. He also supports Jinger's decision to wear the clothing of her choice. So perhaps, if there is a rift, the issue lies between Jeremy and Jim Bob, two patriarchs jockeying for position.

Then again, perhaps the family is doing just fine. The Duggars did post a picture of Jeremy and Jinger on their Instagram feed when the couple announced the sex of their baby. And they do live in different states, which might create a sense of division.

But with her first baby on the way, hopefully if there are any issues, the family can put them aside for the sake of the baby.