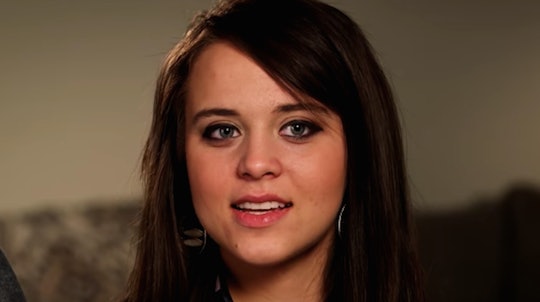 Another day, another Duggar conspiracy theory courtesy of Counting On fans. This time, internet sleuths believe Jinger Duggar hinted at a pregnancy in a new Instagram video, although their evidence is a bit flimsy at best. Even so, it's interesting to consider the idea that another Duggar could be pregnant (even if it's most likely not true). The more the merrier, right?

Jeremy Vuolo, Jinger's husband of one year, took to Instagram on Friday to share a seemingly innocent boomerang of the TLC star playing in the snow at their home in Laredo, Texas. The last time it snowed in Laredo was in 2004, according to the Laredo Morning Times, so it's no surprise Jinger and Vuolo took advantage of this rare snow day.

In the sweet clip, Jinger joyfully hops around in the light dusting of snow, and she looks thrilled to be in the presence of winter weather. But what's actually interesting about the post, however, is what Jinger does towards the end of the clip. If you pay close attention to the boomerang, you'll see Jinger quickly rubbing her mid-section.

Some of you might be wondering why it's newsworthy that a woman rubbed her stomach. Although there's nothing shocking about a person giving their belly a little pat or rub, it is noteworthy if you are on Duggar pregnancy watch.

Yep, some people think Jinger's belly rub is a strong indicator that she's pregnant. I guess the implication here is that Jinger intentionally dropped a major pregnancy hint with the rub or that she gave a little hello to her supposed baby without realizing that fans would notice. Jinger and Jeremy did not immediately respond to Romper's request for comment.

One fan theorized in the post's comments section: "So there will be a pregnancy announcement soon peep the #bellyrub."

Although I can see how the belly rub would lead to pregnancy speculation, there could be a million reasons as to why Jinger touched her stomach in the video. Maybe she was smoothing her pullover, or perhaps she brushed her stomach by accident. Like I said, there are a ton of explanations to go off of here.

Of course, I can't say I'm too surprised that someone concocted a pregnancy theory based on the rub — the majority of Counting On fans are shocked that Jinger has yet to announce that she's expecting.

One person recently wrote to Jinger on Instagram: "Still shocked that you’ve been married this long without getting pregnant." Another fan chimed in: "I'm glad you guys are living it up instead of getting pregnant right after being married."

Considering Jinger's siblings all announced pregnancies just a few months after getting hitched, the speculation is understandable, even though it's not necessarily fair. It's totally possible that Jinger is purposefully preventing pregnancy or that she can't conceive naturally, not that it's anyone's business.

These fans aren't wrong to defend Jinger against the constant barrage of theories. Instead of picking apart every post Jinger or Vuolo shares, fans should perhaps refocus their energy on celebrating pregnancies that are confirmed. Currently, the only Duggar woman who's pregnant is Joy-Anna Duggar. Joy-Anna announced her first pregnancy in August, according to People, and it's expected that she'll give birth sometime in February.

So, the main takeaway here is that this video doesn't really prove that Jinger is pregnant. Although it's a creative theory, Jinger is probably just enjoying her newfound privacy and her relationship with her husband. Case closed.