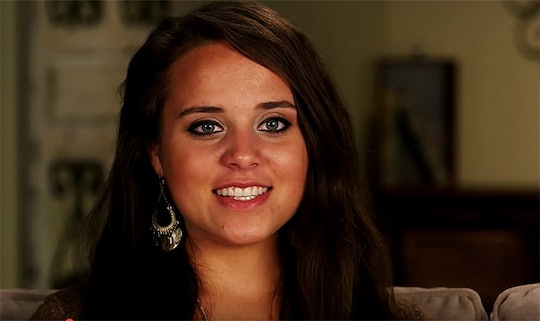 For the most part, the Duggar family seems pretty tight-knit. From the Duggar women giving each other pregnancy advice to the Counting On stars helping each other out with life events (remember that time Jana Duggar renovated Jinger Duggar's entire kitchen?), it appears that everything is hunky dory at chateau Duggar. That being said, however, the Duggars are no different than any family that doesn't get along from time to time. It's natural for loved ones to disagree, right? And when you throw in-laws into the mix, family feuds are even more likely. Case in point: some fans think Jinger Duggar is shading Derick Dillard with this book. Apparently, many people believe that the book's title, She's Got The Wrong Guy: Why Smart Women Settle, is a dig at Dillard's recent anti-LGBTQ remarks against famed interior designer Nate Berkus. Let the speculation begin.

Jinger, who is six months pregnant with her first child, took to Instagram on Sunday to recommend a book to her fans. "Hey single ladies, you may be interested in reading a book I am going through with some of the other women from my church—'She’s Got the Wrong Guy: Why Smart Women Settle' by @deepakreju," Jinger wrote. "Jeremy and I read it together and really enjoyed it. Search for it on Amazon!"

Although it's pretty common for public personalities to share recs with their followers (usually they get paid for advertising that product), people took notice of Jinger's post due to Dillard's recent comments about Berkus and his show on TLC, Nate and Jeremiah By Design. Apparently, Dillard finds it "degrading" that the show's new promo features Berkus' husband, Jeremiah Brent, and their 3-year-old daughter, Poppy Brent-Berkus. "What a travesty of family. It’s sad how blatant the liberal agenda is, such that it both highlights and celebrates a lifestyle so degrading to children on public television as if it should be normal," Dillard wrote on Friday via Twitter. Dillard tells Romper in an email about his comments:

It’s just very disheartening to see how liberal TLC is so biased. They do not accurately represent people and are sometimes even dangerous in the way they portray the challenging horizons facing American culture. With respect to the show you’re asking about, I’ve said it before, but I love homosexual people; I have friends who are homosexual. What I don’t appreciate is a network that is so sly in the way it intentionally chooses its shows to suit its own agenda, as if to pull the wool over the eyes of the American people until we are so desensitized about certain aspects of culture to even care anymore. It’s supposed to be a design show from what I understand. Meanwhile, our Christian faith is edited at every opportune moment. I know because it’s happened many many times to myself. It’s all about what’s being promoted, overtly or otherwise, and how it’s represented.

Of course, sexuality isn't a "lifestyle," and it's concerning that Dillard finds it OK to issue homophobic statements against Berkus' family. Given Dillard's past comments about transgender reality TV star Jazz Jennings, however, his vitriol isn't necessarily surprising.

But what does this have to do with Jinger's book? Well, some Counting On diehards think that Jinger is using the book's title to imply that Dillard is the "wrong guy" for her older sister, Jill Duggar.

"What derick did was unprovoked and hateful. We are all entitled to our individual beliefs, but we must do it in a respectful and loving way," one fan commented on Jinger's post. "Derick did neither."

"It's better to be single than married to a jerk," someone else chimed in.

One person, however, pointed out how unlikely it is that Jinger would shade Derick given Vuolo's anti-LGBTQ views.

"Although I 100% agree with you, Jeremy himself is known for preaching against the LGBT community," a fan wrote to one of the suspicious commenters. "So sadly I don't think their opinion on the matter is that much different from Derick's."

As for the "preaching" the fan referred to in their comment, Vuolo has spoken out against the LGBTQ community a few times. In response to a popular preacher's short-lived endorsement of gay marriage, Vuolo said, according to Cafe Mom:

We're living in a day when basic teachings of Christ in regards to marriage and sexuality are being undermined and eroded, not just out there amongst the radical liberal thinkers, but amongst our so-called Christian leaders ... Just this week, we saw this demonstrated with the endorsement of gay marriage from Eugene Peterson and his subsequent attempt to recant, which really was no retraction at all.

Additionally, Vuolo implied that anything other than heterosexual love is "false." Vuolo did not immediately respond to Romper’s request for comment.

So, while it's interesting to consider a feud between Jinger and Dillard, there's probably a good chance that there's nothing shady about the Instagram post. Not only is it likely that Jinger agrees with Dillard's views, but it's also common for the Duggars to endorse various products and companies on social media.

Still, fans won't know Jinger's true feelings on this matter unless she issues an official statement. Until then, people will continue to speculate.