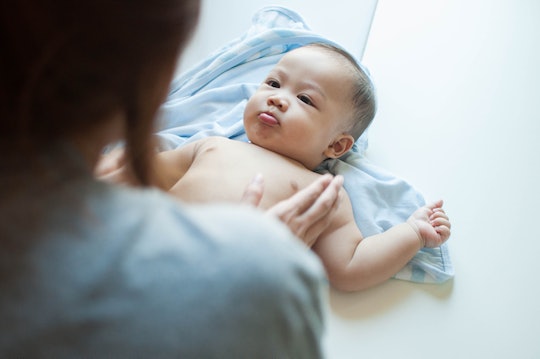 It seems that no matter how often you change your baby’s diaper, there's bound to be some redness on their rump at some point. And since the last thing you want is for your little one to be uncomfortable, you’ll need some fast-acting diaper rash solutions. Because at some point, almost every baby gets diaper rash — and it probably won't be your fault if it happens to your little one.

“Even if a parent is on top of diaper changes, the combination of moisture and lack of air on the sensitive skin of a baby or toddler can cause them to develop a diaper rash,” Dr. Mona Amin, M.D., a board-certified pediatrician, tells Romper in an email. There are other aggravating factors, too, Dr. Amin continues.

“Diaper rashes are common because of the increased moisture present from urine and poop in the diaper and too little air,” she says. “It can be caused by contact with poop (which contains enzymes and bacteria that can irritate a baby’s sensitive skin) or pee (which contains ammonia that can be equally as harsh on your baby’s butt).”

Diaper rash can stem from other irritants as well, like yeast. “Yeast and bacteria live on our skin in normal, healthy levels but when the irritation snowballs, it can often cause these to overgrow in the diaper area,” explains Dr. Amin. And it doesn’t take long for the rash to appear; sometimes all it takes is a few hours.

If your baby's diaper rash is still mild enough to be treated at home, these pediatrician-approved remedies have helped babies for decades.

More Like This
Abbot's Formula-Producing Plant Can Reopen In As Early As 2 Weeks — Now What?
Here’s What You Need To Know About That Viral 1960s Baby Formula “Recipe”
12 Genius Floats With Canopies (& Cupholders), So You Never Have To Leave The Pool
Here's When Your Baby Might Start Sleeping Through The Night For Real