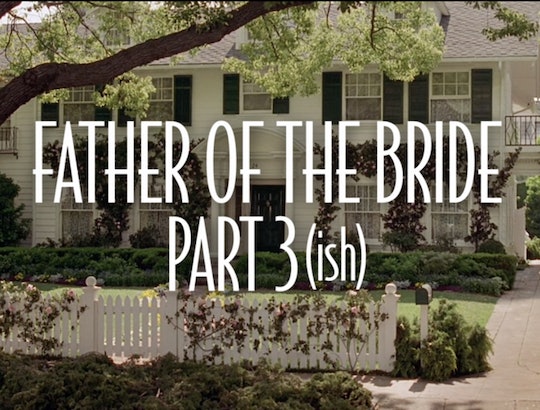 It's been nearly three decades since Nancy Meyers blessed us with stressed out businessman dad George Banks and wedding planner extraordinaire Franck Eggelhoffer. And after all this time, a brand new Father Of The Bride special from Netflix is dropping on Friday, Sept. 25, reuniting the entire cast in a mini-movie called Father Of The Bride 3(ish) set in 2020.

Written and directed by Meyers, of course, Father Of The Bride 3(ish) is being billed as a mini-sequel to benefit World Central Kitchen. World Central Kitchen is an organization founded by Chef José Andrés working to provide meals for children and families who have been impacted by COVID-19.

For the special, Steve Martin will return as George Banks as will Diane Keaton as his long-suffering wife Nina Banks and Martin Short as Franck Eggelhoffer. Kieran Culkin will reprise his role as their son Matty, while Kimberly Williams-Paisley will return as Annie Banks-McKenzie along with George Newbern who played her husband Brian McKenzie in the two first installments. There will also be some new special guests, although no word on who they will be.

The new Father Of The Bride special will drop at 3 p.m. PST / 6 p.m. EST on Netflix's YouTube channel and Facebook page. Until then, here's the trailer to whet your whistle.

A quick catch-up for those who need it: The first Father Of The Bride movie, which premiered in 1991, sees George Banks discovers his daughter is about to get married and doesn't like it. The wedding, organized by difficult-to-understand Franck Eggelhoffer and his assistant, gets wildly expensive. George has a meltdown. In the sequel, 1995's Father of the Bride Part II, George becomes a grandfather and a new father at the same time, with many more meltdowns and more Franck as the baby shower planner.

While there have been several reunion-type Zoom events during the pandemic, most recently with Fast Times At Ridgemont High, the Father Of The Bride special is different. Instead of a table read, Steve Martin explained on Twitter that this is an "actual mini-movie, with the original cast and MAJOR surprises. No rehash!"

Millions of fans who have watched and re-watched the first two films are in for a treat. Not just sweet Franck, but the whole cast in a mini-movie directed by the incomparable Nancy Meyers. Now you know what to do with your Friday night.