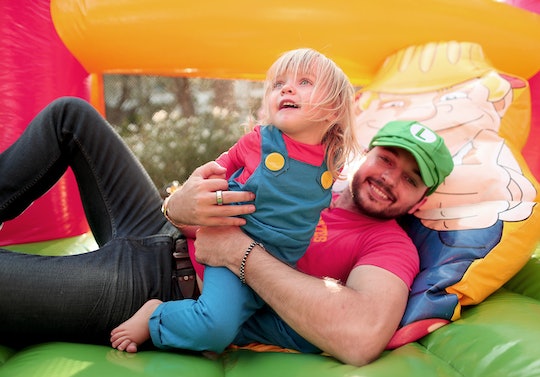 Fathers Are More Emotional With Daughters Than Sons

It's no secret there are plenty of stereotypes about parenting. One of the common claims is that fathers tend to parent their daughters with more softness and emotional availability than they do their sons. In a recent study, researchers found this cliché to be mostly true. Jennifer Mascaro, who conducted the study, found fathers are more emotional with daughters than sons, according to The Washington Post.

To find out whether the parenting cliché was true, Mascaro and her team of colleagues at Emory University and the University of Arizona enlisted 52 new dads with children between the ages of 1 and 2. It's important to note that 34 of the fathers had daughters while 35 of them had sons, and that the study states "fathers of daughters and sons did not differ in age, child age, ethnic composition, yearly combined household income, or hours worked per week."

Once the team assembled the study's participants, the fathers and their children were closely monitored for 48 hours at their homes using elaborate recording devices. The researchers then analyzed each interaction between the fathers and children to see if there were any patterns of behavior based on the children's genders.

Although the relationship between parenting and gender has evolved over the years, Mascaro and her team ultimately discovered a major stereotype still exists when it comes to how a father parents daughters versus sons. According to Mascaro's study published in the American Psychological Association’s journal of Behavioral Neuroscience, fathers engaged in more roughhousing type play and used more language related to achievement, like as “proud," “win," and “top." As for the daughters, fathers tended to sing more as well as rely on emotionally sad and analytical words like “all," “below,” and “much." Using more analytical language early on with children has been linked to future academic success, which is just one of the ways parenting based on gender stereotypes can have a long-term effect.

Mascaro believes this difference has to do with the supposed lack of emotional involvement associated with rough-and-tumble play, according to the Washington Post:

Rough and tumble is this special situation where this kind of movement is okay, but you really have to attend to your partner's emotions: Are they still having fun? I think it's really intriguing to think that attending to more ambiguous facial expressions might be important.

Because Mascaro and her team aren't sure whether the differences found in the MRI scans are related to genetics or societal norms, she wants fathers to know this study isn't meant as a critique in any way.

According to a press release from the American Psychological Association, Mascaro said:

Findings like this shouldn’t necessarily be taken as ill-intent or negative on the part of the fathers. It really could indicate fathers trying to do the best they can to prepare their children for the world.

That being said, Mascaro did offer an important piece of advice for fathers, according to the press release:

The fact that fathers may actually be less attentive to the emotional needs of boys, perhaps despite their best intentions, is important to recognize.

Although this study doesn't represent the truth for all fathers, it's important to take into account how parenting can be influenced by a child's gender. Whether the reason be evolutional or societal, many parents might be reinforcing gender stereotypes without even realizing it. It's studies like Mascaro's that allow parents the opportunity to reexamine their behavior and parenting style, if they feel that's what's right for them and their families.