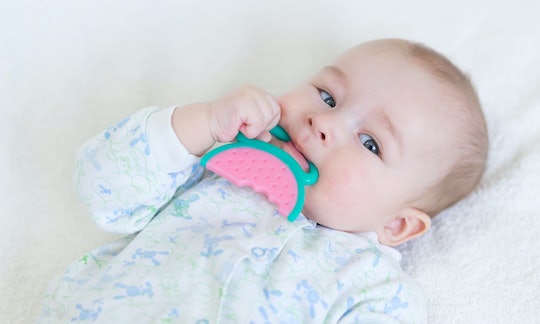 The FDA Issues A Strong Warning Against Teething Medications, & Here's What You Should Know

If you have a baby in the throes of teething, you'll probably want to pay attention to the FDA's new warning about the dangers of teething medicines. The warning — issued on Wednesday — claims certain ingredients in these medicines can cause life-threatening side effects in kids, according to The Washington Post. Although the FDA's report is scary, rest assured that there is plenty of information out there on how to best protect your kids going forward. On that note, here's what parents need to know about the FDA's warning about teething medicines.

If you Google teething issues, a bunch of articles will pop up offering remedies. One of the possible solutions involves teething medicine, an over-the-counter product that is applied to a child's gums. Although there are lot of over-the-counter teething medicines out there, the most common one is arguably Orajel Medicated Teething Gel. Orajel claims the medicine is an "instant-relief" solution to teething pain, according to the company's website. The problem is with the product, however, at least according to the FDA, is that it contains a potentially dangerous ingredient called benzocaine, according to TIME.

Church & Dwight, a company that acquired Orajel in 2008, tells Romper in an email:

In addition, we also are revising the Drug Facts Label on all over-the-counter oral health care products that contain benzocaine with an intended use other than teething to emphasize that these products should not be used for teething pain or in children under 2 years of age. In addition, we are adding warning statements to more clearly identify the risks and symptoms presented by methemoglobinemia, a rare but serious condition associated with the use of benzocaine.

For more information, please visit www.fda.gov or call our Consumer Relations hotline at 1-800-952-5080.

For those who aren't familiar with the risks associated with benzocaine, a local anesthetic, it can cause cause a "condition in which the amount of oxygen carried through the blood is greatly reduced," according to the FDA's website. The condition is called methemoglobinemia, and it can lead to life-threatening issues and even death.

“We urge parents, caregivers and retailers who sell them to heed our warnings and not use over-the-counter products containing benzocaine for teething pain,” FDA Commissioner Scott Gottlieb, explained in a statement, according to USA Today.

Making the FDA's case especially strong is that there's evidence to suggest that benzocaine products "provide little to no benefits for treating oral pain," according to the FDA.

So, what does the FDA plan to do about products for kids that contain benzocaine? As it turns out, the FDA hopes to eliminate these medicines from stores entirely — at least where it concerns children under the age of 2. The FDA stated, according to CNBC:

We have urged manufacturers that they should stop marketing OTC oral drug products for treating teething in infants and children younger than 2 years. If companies do not comply, we will take action to remove these products from the market.

In the meantime, the FDA wants companies to enact the following changes, according to the FDA's website:

Still, the FDA's warning and action plan doesn't negate the fact that many babies out there are struggling with teething. Luckily, there are a lot of safe teething remedies out there for parents to consider. Some options include: a cold spoon, a gum massage, a cold washcloth, and chilled foods, according to Parenting. Translation: placing anything cold on your kid's gums should do wonders.

On another note, if you're really stressed right now because you used teething medicines in the past, don't freak out. Methemoglobinemia is a fairly rare condition, and there are clear symptoms to watch out for if you're concerned. As I've mentioned with previous FDA warnings (who could forget the E. coli breakout in April?), the best thing you can do right now is arm yourself with the most relevant and trusted information.