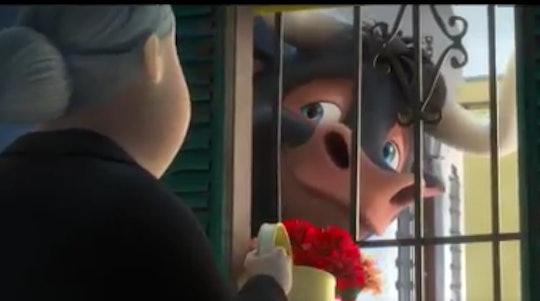 'Ferdinand' Trailer Will Give You All The Feels

Ever heard the expression, Take time to stop and smell the roses? Who hasn't needed the gentle reminder to slow down every once in a while, to pay attention to all of the beautiful things in this world rather than getting caught up in pain and ugliness? Well, I guess the fabled Ferdinand the Bull didn't really need that reminder; As the story goes, all he ever wanted to do was stop and smell the roses. He didn't want to fight. He just wanted to be happy. For a little dose of nostalgia, check out the new Ferdinand trailer, based on the popular children's book of the same name. It will remind you of a sweeter time from long ago, and remind you that it's always a good idea to stop and smell the flowers.

The Story of Ferdinand was written in 1936 by author Munro Leaf and illustrated by his friend, Robert Lawson. It is set in the hills of the Andalusian mountains, where a young bull named Ferdinand is very different from all of the bulls around him. The other calves love to fight and butt horns, hoping to be chosen to join the bullfights in Madrid; Ferdinand just likes hanging out and smelling roses. Unfortunately for him, he grows up to be the biggest and strongest bull, which makes him a prime candidate for the bullfights. But sweet, innocent Ferdinand won't fight the handsome matador, instead choosing to lie down and (you guessed it) smell the flowers.

WWE wrestler John Cena voices the big, gentle bull in the new 3-D animated movie, which is set to be released in December 2017. During an interview with the Today show where he handed out flowers to the hosts, Cena pointed out the similarities between Ferdinand and himself, saying:

The trailer finds Ferdinand attempting to gingerly make his way through town without causing any problems because of his size; He even ends up being the literal bull in a china shop with hilarious results. The film by veteran director Carlos Saldhana promises to be a nod to the very nature of Ferdinand's story; the story of being true to yourself, no matter what.

Oddly, The Story of Ferdinand was considered a radical piece of inflammatory literature during World War Two. Many leaders at the time considered it pro-pacifist, and potentially dangerous for its blatant message of nonconformity. Adolf Hitler ordered all copies of the book burned in Nazi Germany, and it was banned in Spain during the Spanish Civil War.

The book did have one very important fan, however; pacifist leader Mahatma Gandhi once said the The Story of Ferdinand was his favorite book. Which means it's OK in my book too. The new movie looks to take a lighter look at Ferdinand's story, making kids laugh while subtly teaching them the importance of staying true to their nature at the same time.

But perhaps the most important reason to see Ferdinand? It will remind you of a time that was a little gentler, a little more peaceful, and a little more hopeful. That's definitely worth the price of a movie ticket.