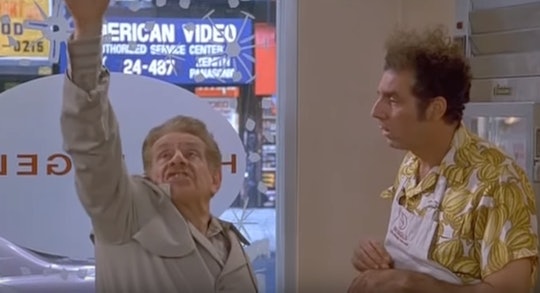 Festivus Memes & Jokes For The 'Rest Of Us'

It's that time of year again, folks. The Festivus for the rest of us is finally here, and honestly it couldn't have come at a better time. Because 2017 was a trainwreck of a year, and I think everyone is ready to air their grievances loud and proud. Not think, actually; based on these amazing Festivus memes and jokes, I know the people of the world were probably looking more forward to Festivus than that *other* holiday that might fall just two days later.

For those of you who aren't already well-versed in the ways of Festivus, I'll give you a little background. While Seinfeld might have brought the concept of Festivus to the masses, it was actually based on a holiday Seinfeld writer Dan O'Keefe's father invented in his own childhood. With a few tweaks and some creative liberties by O'Keefe, the new tradition of Festivus was shared in an episode of Seinfeld called The Strike. And this version of the holiday is the one many people celebrate today. Now, Festivus followers can celebrate the great day on Dec. 23 by following certain, easy-to-follow steps, as laid out by the inimitable Frank Costanza, father of George Costanza and friend to Cosmo Kramer, on Seinfeld.

Want to celebrate Festivus like the rest of us? Here's how you do it:

Get yourself a Festivus pole with a good "strength-to-weight" ratio, preferably made of aluminum. Do NOT decorate this pole, as it is meant to be enjoyed in its unadorned natural state. Sure, you can buy a Festivus pole if you like. But Festivus is all about defeating the commercialism of the holidays. You're better off just finding any old aluminum pole.

Don't feel like making a big feast for the holiday? Great, because the traditional Festivus feast consists of meatloaf on a bed of lettuce. If meatloaf feels a little too strenuous for you, just put together some sort of meatloaf-shaped food a la Estelle Costanza. Bingo, bango, you're done.

And if you're worried about what to do at the Festivus dinner, Frank Costanza has a great evening planned out for you.

Probably my favorite part of Festivus; the airing of grievances. Gathering your loved ones around the Festivus dinner table, gleaming aluminum pole lighting your way, to tell them everything they do that makes you nuts. If you've been invited to a friend's house for dinner tonight and you know you've done something to irk them, you might want to get ready for this.

This year is actually a particularly special year for the Festivus tradition. It's been 20 years since the world was introduced to this wonderful holiday, and many people think the United States has finally found the perfect representative for Festivus; President Donald Trump. A man who loves to air his grievances, as noted by CNN. Although I assume his Festivus pole would be made of solid gold. Still, finding such a perfectly appropriate mascot for the holiday 20 years after its inception is a Festivus miracle!

Speaking of Festivus miracles, this is another fun part of the holiday; calling common occurrences like picking the shortest line in the grocery store or finding a five dollar bill in your winter coat pocket Festivus miracles. For instance, my coffee tastes 100 percent perfect right now. That almost never happens.

The only way Festivus ends is when someone manages to wrestle the head of the household and pin them to the ground in a glorious display of strength. The head of household gets to choose one of his or her guests, so you might want to do a few push ups to prepare.

Because as great as Festivus is, like all wonderful things it has to end eventually. Otherwise we can't move on to Christmas.