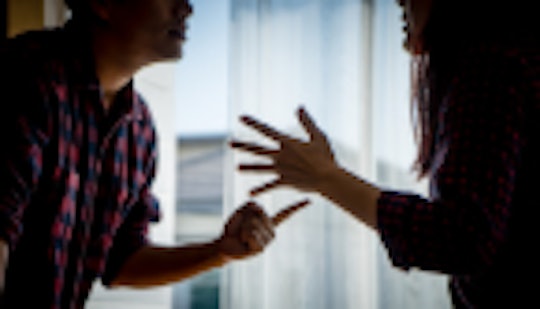 Everyone has a different opinion of whether or not fighting is healthy for couples. To be honest, I sort of think it doesn't matter whether or not people think you should fight with your spouse or not. Because something is going to happen, probably dishwasher loading-related, and you're not going to think about fighting. You're just going to fight. But maybe, just maybe, you shouldn't. Because fighting with your spouse might make you sick in a pretty gross way. So maybe just let your spouse put pots and pans in the dishwasher like a sociopath and stay healthy?

A new study from the Ohio State University Wexner Medical Center looked at the way arguments with your significant other might affect your health. Or more specifically, your gut health. The research gathered found that couples who had especially hostile fights were more apt to suffer from leaky gut syndrome. So here's what happens with leaky gut syndrome; the walls of the intestines become more permeable, according to Web MD, making it easier for things like bacteria to seep into the bloodstream. People suffering from leaky gut might experience uncomfortable side effects like bloating, gas, cramps, food sensitivities, and aches and pains.

And it might be exacerbated by a big fight with your spouse.

Now before you decide you are never going to have a little spat with your partner again, take heed. Study lead author Janice Kiecolt-Glaser explained in a statement that couples who fight aggressively on a regular basis were more at risk to get ill from the emotional turmoil, according to NBC News:

This study takes a look at chronic, everyday, real-life stress and leaky gut. We know that inflammation leads to leaky gut and causes a number of age-related diseases. Our research shows that marital stress is furthering that inflammation.

Researchers from the University of Ohio looked at 43 physically healthy married couples, encouraging the couples to have real discussions and focus on conflict resolution that would usually cause a big argument. Things like money and family were discussed, which are always pretty difficult waters to navigate for any couple. They left the couples alone and filmed them for 20 minutes, paying close attention to especially hostile behavior like harsh criticism and my personal favorite argument tactic, the eye roll.

Kielcott-Glaser, a professor of psychiatry, noted in a statement that hostile behavior is a "hallmark of a bad marriage" and can lead to "adverse physiological changes." With that in mind, researchers took blood samples from the couples before and after their discussions and compared them. The extra hostile men and women had higher levels of one of the markers for leaky gut, LPS-binding protein, than their calmer counterparts. If one of the people in the study also suffered from depression, researchers found they were at an even greater risk for leaky gut, according to the statement:

Depression and a poor marriage - that really made things worse. This may reflect persistent psychological and physiological vulnerabilities among people who have suffered from depression and other mood disorders.

Although the researchers pointed out to The New York Post that the couples who were more at risk for leaky gut could offset the danger by eating lots of lean protein, whole grains, and healthy fats. You know, in case they were super attached to the hostile fighting and didn't want to give it up or something.

Otherwise, perhaps it might be a good idea to give the marriage self-help section a little glance? Maybe some marriage counselling wouldn't be the worst idea in the world either. Not that I want to tell you your business, but I'm willing to give up my classic eye-roll if it means I can avoid leaky gut.