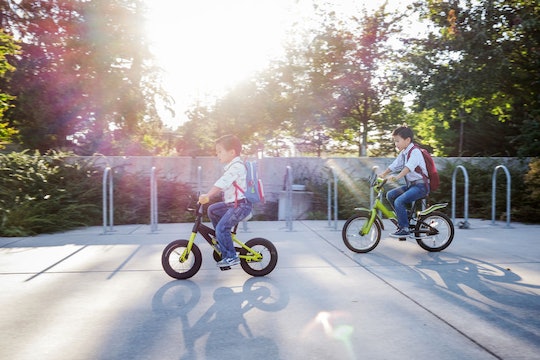 Finding The "Right" Kindergarten Has Become An Anxious Rite Of Passage

When I was a kid, everyone just went to the elementary school that was closest to them. It’s still more or less the default these days, except now we also have something called “school choice" — systems allowing you to rank your preferences for local schools, or try to test your 4-year-old into a gifted and talented program at a magnet school. In the new order, finding the “right” kindergarten for my child has replaced old worries — pre-term labor, SIDS, careless daycare workers — as the occupying concern in my life.

The process reminds me a little of looking for the right college. There’s way more research involved, and the more you learn about how different each school actually is, the more anxiety-inducing it becomes. It speaks to a larger problem: why aren’t all children receiving the same education? And why is it up to the parents (aka me) to try and get my kid into the “best” one? (A separate but important issue, for sure.)

I began my search for the “perfect” school a bit late in the game. I started off by trying to figure out what qualities were important to me. Making sure my kid is safe and comfortable was one. Smaller class sizes was another (the Center for Public Education notes that young kiddos should remain in classes that have 18 or fewer children in order to truly reap the benefits). A bilingual program was yet another — I’m bilingual and there are tons of benefits to bilingualism, so it seems like a silly thing to not do. Plenty of opportunities to play outside (or at least enjoy free play) was indeed another. And safety, of course, from outside threats and internal bullying, was another major one.

With every tour, I learned more about what I did and didn’t like from each school. I became obsessed with having every question answered, with reading up reviews and accounts from other parents.

The School Choice website offered some insight into all area schools, most notably which ones had any sort of bilingual program. I used this as a guide to slowly choose my top few schools in order to set up tours. That’s right, touring elementary schools is apparently a thing (and yes, I know New Yorkers have it worse when it comes to seeking preschools, let alone elementary, but let’s be real: all of this is kind of wild, isn’t it?) Some schools were fairly open to anyone wanting to come by and see the school whenever. The more competitive ones, however, required you to show up only on certain days/times. And if you couldn’t make it? Yep, you’re screwed.

I arrived at each tour ready with multiple questions. How did they handle active shooter drills? How many breaks and moments for outdoor recess did they receive? What steps were they taking to prevent and combat bullying? Did kids get sufficient time to eat lunch? Would my son get enough attention in his classrooms? How many kids would be in each class? Was there homework? Could I maybe just camp out in the back of class until he graduated high school? So many questions (and so much damn anxiety).

With every tour, I learned more about what I did and didn’t like from each school. I became obsessed with having every question answered, with reading up reviews and accounts from other parents. My anxiety levels began to go higher and higher, causing me some insomnia and mood swings. I spoke with my therapist about it, who did her best to remind me that there was no real use in being anxious over the things I can’t control (but easier said than done, right?)

Eventually, I narrowed it down to three options (two places that were ideal and the neighborhood school, which I wasn’t exactly wild about). I tried to relax, to enjoy knowing that for now, he was still in his preschool. Plus, I figured he might have a good shot at getting into the first two. But a few weeks later, I got the text: waitlisted at both top choices, accepted at his neighborhood school. With just a few words on a screen, I realized that all my anxiety was for naught.

The fact is, there’s no perfect school, and I’m not the only parent freaking out about their child entering kindergarten. I spoke with several others moms who were also struggling with finding the right school, and with the general feelings surrounding their child starting kindergarten. Many highlighted some of the same concerns I have: gun violence, bullying, overcrowding.

“It just felt like there was so much pressure to make the right choice, but what constituted the ‘right’ choice was unclear,” says Mary Beth Foster of Mint Hill, N.C.

The 38-year-old mother struggled in her search for a kindergarten for her child. While their local public school was highly rated, she wasn’t sure that they could provide the type of education she desired for her daughter.

She attempted to choice her kid into a Montessori school, but did not end up getting a spot. Eventually, they opted to put her daughter in the private school she works at — but she still isn’t fully sure whether to feel confident or not at all about the decision.

Foster noted that she definitely experienced more moodiness leaned into bad habits like overeating during her school search. Krystal Kosik-Eagleton, another mom I spoke with based in Centennial, Colo., also noted feeling moody and isolated during her search. She was very concerned with whether full-day kindergarten would be good for her daughter, and almost enrolled her in a nearby, half-day school. But 34-year-old Kosik-Eagleton eventually enrolled her child in full-day, and the little one has been thriving ever since.

Like Kosik-Eagleton, 38-year-old mom Katie Dohman’s biggest concerns when seeking a school revolved around ensuring her child would be safe.

“I’m terrified my children will be shot at school,” the West St. Paul, Minneapolis mom says.

Her anxiety manifested in everything from mood swings and irritability, to the occasional tears. But despite the butterflies she had in her stomach for weeks prior to her child starting kindergarten, it all turned out alright.

“She has thrived and then some. She was more than ready. It was me who wasn’t,” admits Dohman.

At the end of the day, my son will have to start kindergarten no matter what. I alone will also not be able to protect him from every single danger this world wants to throw his way. All any parent can do is do their research, and then prepare their child as much as possible for whichever school they land in.

“Consider your child’s temperament and needs, as well as your own. Consider the amount of homework that is assigned... Be flexible, open to change. Ask questions,” Eagleton says.

Dohman also has some words for anxious parents: “Your child will thrive at any school if you are there to support your child. You are already a good parent. Your child will be successful. And if it isn’t working out, you can always find another school.”

If you’re finding yourself in similar waters, remember there are always options. My son will be going to his neighborhood school for now. I’m shifting my expectations, and most of all, focusing on ensuring my son feels prepared and confident that he’ll have a good experience. It’s not easy watching our babies grow. Instead of adding to their own worries and fears (and our own), let’s work on giving them all they need to enjoy the journey forward.