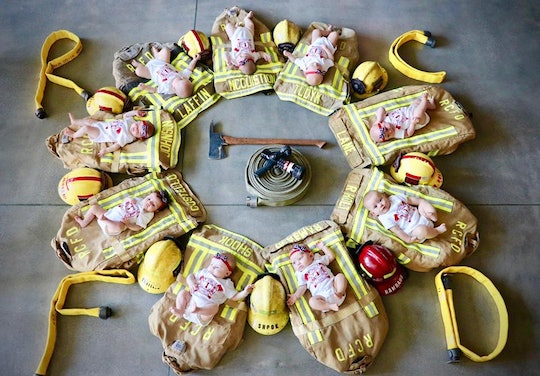 Congratulations are in order one busy fire department in Southern California! To commemorate a recent baby boom, nine firefighters posed with their sweet newborn babies, who were all born within five months each other earlier this year, for the most precious photo shoot. And, fortunately for the rest of us who can never get enough sweet baby photos, the proud new dads shared the adorable images on Facebook for people all across the country to enjoy as well.

"Say hello to Rancho Cucamonga Fire’s newest little family members!" the fire department, located about an hour away from Los Angeles, California, shared on Facebook over the weekend. "Between March and July of this year, nine babies were born in the department and we couldn’t pass up the opportunity to capture this special moment."

A special moment indeed! The post, first shared on Sept. 22, has quickly gone viral, racking up more than 3,000 reactions and over 1,000 shares on Facebook as of Tuesday, Sept. 24. And, as you might have expected, people are absolutely loving the photos. "So wonderful, thanks for sharing your blessings! Congratulations and happiness to everyone!" one Facebook user commented, while another chimed in, "Be still my heart!! Congratulations to you, one and all."

In one especially sweet photo from the shoot, the nine firefighters are standing in a line, holding their itty bitty babes over their heads. So cute!

The most precious shot, however, might be of just the babies laying down on their dads' firefighter jackets, arranged in a circle with the department's initials — RCFD — surrounding them. There's also an ax and hose in the middle. Talk about attention to detail.

However they managed to capture this sweet image with all babies looking relaxed and remaining in place is certainly impressive. And don't worry, as CNN reported, the fire department confirmed that the jackets were indeed clean before the babies laid on them.

In another touching photo from the shoot, the firefighters and newborn babes posed with their moms. That one is definitely a framer for the office.

While it seems like something was definitely in the water at the Rancho Cucamonga Fire Department, baby booms like this happen more often than you might think. Back in January, for instance, eight nurses who worked at the same hospital in Illinois also gave birth within a few months of each other. And in July, 36 — yes, 36! — NICU nurses from the same hospital were all pregnant at the same time in Kansas City, Missouri, according to USA Today.

As for this fire department's baby boom, Gabrielle Costello, a spokesperson for RCFD and one of the new moms, told CNN that it just kind of happened by "coincidence."

According to the fire department's Facebook post, all of the babies were born between March and July of this year, which means the cuties in the photos are about between 2 and 7 months old now. "We are thrilled to see our RCFD fire family keep growing!" the adorable post concluded.