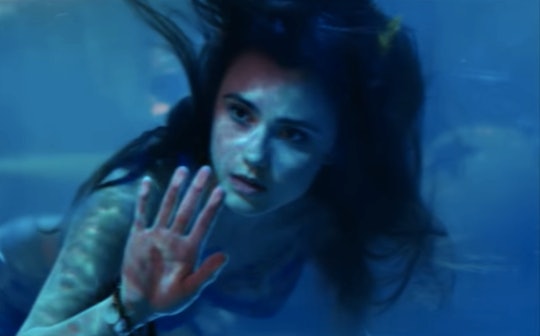 If you never dreamt of living under the sea with your many mer-people, having fish as friends, and a singing crustacean to croon the soundtrack of your life, you've clearly never seen The Little Mermaid. But have no fear — the first live-action Little Mermaid trailer has been released, so we can all enjoy it together. Bless.

Fans expecting a live-action version of Disney's The Little Mermaid might find themselves a little thrown off by this decidedly more somber tale, although still not quite as dark as the original Hans Christian Andersen fairy tale The Little Mermaid from 1837. In Andersen's tale, a young mermaid rises to the surface to see a young, handsome prince celebrating his birthday on a ship before a storm capsizes the vessel. Much like the Disney version, the mermaid saves the prince and falls in love. Various difficulties ensue (far darker than the cartoon, of course; Victorian children must have been made of sterner stuff than us modern folk) and, spoiler alert, a happy ending is decidedly not had by all. This new take on The Little Mermaid appears to be cut from a totally different cloth. Set in Mississippi in 1837, the story revolves around a young girl (played by newcomer Loreto Peralta) who finds a beautiful woman she believes is the real little mermaid.

The woman in question is a circus performer known as the "Mermaid of Mississippi." The beautiful mermaid (Downton Abbey's Poppy Drayton) is in need of rescuing from an evil magician trying to steal her soul; thankfully, the young girl has a super cute older brother who is a reporter (William Moseley) and also willing to rescue damsels in distress, especially if they're part-time human and part-time mermaids. The legendary Shirley MacLaine also stars in this independent film by Conglomerate Media and Kingsway Productions. There will be singing, if the trailer is anything to go by, and hopefully a happy ending. Honestly, I can't even.

The story of The Little Mermaid is seeing a real resurgence in Hollywood these days. Not only is this version scheduled for a summer 2017 release, fans can also expect a Disney live-action remake of their classic 1989 film. Hamilton dynamo Lin-Manuel Miranda has attached himself to the new movie as a producer, and will be writing all new original songs with legendary Disney songwriter Alan Menken.

And in case you were interested in a really, really different sort of mermaid tail (pun intended), you could always check out the upcoming remake of Splash!, based on the 1984 original film starring Tom Hanks and Darryl Hanna about a regular dude who falls in love with a mermaid. In this Disney retelling, Magic Mike's Channing Tatum will play the merman, and Jillian Bell the regular gal, I imagine.

2017 is basically coming up mermaids. And now we all know what to wear for Halloween.