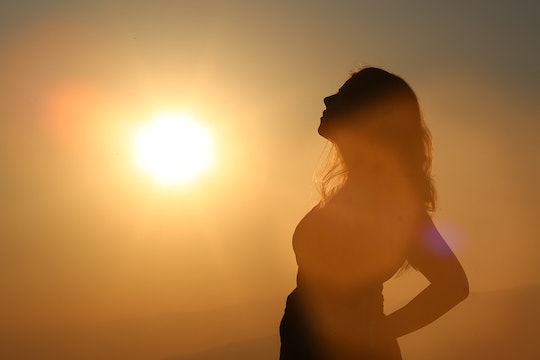 Sometimes it feels as though there is just no winning as a pregnant woman. While many women feel judged or pigeon-holed on a day-to-day basis because of how we look, there's just something about pregnancy that brings out the real finger pointers. Almost as though the presence of another person living inside you gives the world free reign to really let you know how they think you should look. Case in point; this fit mom who was accused of having "pregorexia" in a recent magazine article, simply because she has chosen to make fitness a priority.

The term "pregorexia" is relatively new, and as OB/GYN Dr. Kecia Gaither explained to Fit Pregnancy, it refers to "a pregnant woman who exhibits signs of having an anorexic eating disorder. That's pretty much what it boils down to: They are very conscious about their caloric intake, they are very adamant about exercising to the point where it's not healthy."

A recent article in the Courier Mail, a media outlet from Australia, looked into the adverse effect social media posts can have on the way pregnant women look at themselves (according to the article, 50 percent of pregnant women compare themselves unfavorably to the images they see on social media). The article then pointed to personal trainer Chontel Duncan, who has reportedly seen her fair share of backlash for sharing images of her toned pregnant belly online. While the Courier Mail did not officially diagnose Duncan with pregorexia, her inclusion in the article had certain misleading undertones.

The fitness blogger said in a subsequent Instagram post that she believed she was being interviewed for a positive news article about fitness and pregnancy; Instead, she was included in an article entitled, "'Pregorexia' is fuelling body dissatisfaction, putting pregnant mum, bub at risk, say experts." Rather than allowing herself to be informally diagnosed with an eating disorder, Duncan decided to fight back.

In the Instagram post, Duncan responded to the Courier Mail article and wrote that she felt she had been "misled to think she was being asked to display her passion for normalising one of the amazing benefits to living a healthy lifestyle prior to conceiving." Duncan, who is pregnant with her second child, went on to note:

Exercise benefits more then just a pregnancy, it's far beyond that but if I have a platform to spread a positive message across the world instead of all the negative that is out there in this world, why wouldn't I? Instead money hungry papers need to try bring down a mother who is also expecting to make a headline and grab some extra attention and readers. Shame on them for playing a part in social media trolling/bullying on such a large scale. Can you imagine how you'd feel if a well know paper made a fool of you?

There is no room for media outlets — or anyone for that matter — to infer or imply that a woman has an eating disorder based on her photos. There was a time when this was a thing, when young actresses were blithely called "anorexic" or "morbidly obese" based on a simple photo. Not anymore.

This sort of mad finger-pointing negates the reality of actual eating disorders. It leads the way to a dangerous over-simplification of a very real danger. It categorizes women based on easy assumptions, rather than facts. Worse, it reinforces this long-held idea, that women (especially pregnant women) owe the world an explanation about how they look.