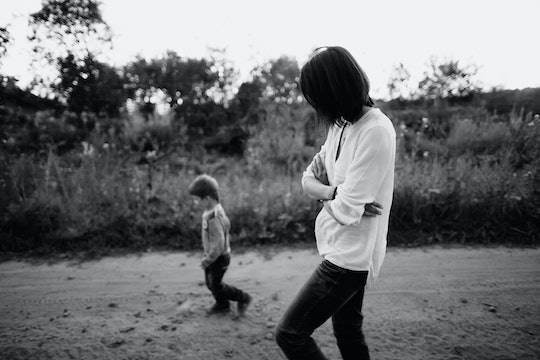 How far can a mother be from her children? Lenka Clayton tried to measure it on film in her 2012 artwork created through An Artist Residency in Motherhood. “The Distance I Can Be From My Son (Park),” opens on a child toddling around on a rolling green fringed by trees. For two minutes, he ambles further from the camera, periodically turning around to gaze back. His figure becomes smaller as he moves further away and toward the forest, the camera static and waiting. At 1 minute 29 seconds, and 51 meters, Clayton rushes out past the camera, sprinting after her child. She tries the experiment again in a back alley (42 meters) and a supermarket (17 meters). The longer the delay, the greater the tension.

We are very uncomfortable with the idea of a mother apart from her child, especially if she is that way by choice. It drives us a little mad.

That tension runs through Taffy Brodesser-Akner’s ripper of a novel, Fleishman Is In Trouble (out June 18 from Random House), which has us hurrying through her cutting prose for an explanation why Rachel Fleishman, a successful mother of two, would dump her kids on her husband, drive to Kripalu Center for Yoga & Health (distance from her son: 138 miles), and never return.

Toby Fleishman, a doctor in New York specializing in livers, is working his way through a backlog of dating-app sexts when he finds their tweens in his care, replaced into their beds in the night. His wife’s absence is an existential mystery the hepatologist ponders over the unconscious body of a patient: “This was the spectrum: one man begging God for his wife to be healed; another wondering where the fuck his wife was and why she couldn’t be bothered to return a text.”

That patient, a woman suffering an acute liver illness (“it was a beautiful disease”), is revealed to be a mother. Toby lifts the sheet and sees the cesarian scar on her abdomen: it only deepens the mystery. She had gone on a girl’s weekend to Las Vegas, drank a lot, and fell unconscious on her return. Mothers can’t just be disappearing! you feel Toby thinking. What about their kids/husbands/obligations?

Mothers think about running away all the time.

There are, of course, clues among the dissatisfied mothers of the Upper East Side, headed to Soul Cycle in their “Na-Mah Stay In Bed” tank tops. But for Toby, and other husbands, such a mystery!

Toby alternates between true worry about Rachel’s wellbeing, and concern that Rachel has broken some natural law: “He wondered if the children would become pariahs when it became clear to the school moms that Rachel has drifted further away from the port than could ever be forgivable.”

It might be unforgivable, but mothers think about running away all the time.

Absent fathers are a sadness, but missing mothers are a tragedy in literature. Elena Ferrante’s Neapolitan novels don’t tip over into outright despair until the character Lenù is enticed away from her husband and two daughters by Nino (f*cking Nino!). Her absence for the next few years is addressed matter-of-factly, even if Lenù’s mother-in-law judges her harshly for dumping her children on their grandparents, or on Lenù’s friend Lila. I understood Lenù and Lila, her other half, as co-existing thoughts about motherhood, demonstrating the push-pull you might feel at any given moment. The men come and go… who even cares? But the great sadness, we learn, is that children can likewise disappear in a world where mothers aren't plumbing all the cracks at all times.

In Ferrante’s The Lost Daughter, which packs the same concerns, and basically the same characters, into a shorter story, a young mother asks the main character, Leda, “Why did you leave your daughters?”

“I loved them too much and it seemed to me that love for them would keep me from becoming myself,” Leda answers flatly.

Lenù and Leda are too smart, too sharp for a world that wants them to sacrifice everything to motherhood (a trick! Rachel shouts out after a birth in Fleishman Is In Trouble), and Ferrante is not sorry that they have to leave their kids. They have to, she explains. We wouldn’t have a novel without it.

Kate Atkinson likewise feels pretty sorry for the great-grandmother, Alice, who deserts her frumpy life as a housewife and mother in Behind The Scenes At The Museum, a very funny book that feels funereal. Alice runs away on a whim with a traveling photographer, but soon realizes her mistake and lives out her days searching for her children. Do we blame her? Unclear.

Parents believe that if we leave once, we forfeit the entire relationship.

In Maria Semple’s Where’d You Go Bernadette, early glimpses of the oppressive school-mom scene in a suburb of Seattle prepare us to hunt down Bee’s missing mother Bernadette, who surely deserved more out of life. Kate Greathead’s mother-daughter novel Laura and Emma pre-empted the discussion about the new postpartum wonderdrug, Zulresso (if you want to get literal about all of this, which I don’t necessarily). Objections to Zulresso were generally of the “how could a mother leave her baby to go get hooked up to an IV for two days?” flavor. But as Greathead’s novel shows, acute mental illness, or any other sort of motion, might mean you have to leave your kids.

Leaving certainly isn’t much of a choice for one group of mothers: adventurers. “We wanted to be out in the field tromping around getting exercise, because we'd have to go home and look after our children,” rockclimber and author Jan Redford told me last year while promoting her memoir, End Of The Rope, which sees numerous boyfriends, husbands, and fathers swept away in guilt-free avalanches. Katie Arnold, ultra-runner and author of Running Home, has written about escaping her infants to run the trails outside Santa Fe, NM — there, she watched the birds. “They knew nothing of life on the ground. They dipped and soared, the embodiment of fearlessness and freedom.”

We understand this need. Why, then, the fekking tension?

The thread that joins the parents of New York's Rockland County, convinced that vaccination will ruin their children's bodies, with parents who "don't believe" in sleep-training is a fear of what was initially documented in Russian orphans and neglected rhesus macaques: “insecure attachment.” A fear that the bond we form with our children will be ruptured by some crying at bedtime, or the injection of an egg protein, or a child-free girls' weekend. We are all terrified, at this point in time, that even having done the skin to skin in the maternity ward and kept our babies in bassinets no more than an arm’s reach away from our beds and nursed our kids into pre-K, we will bugger it up somehow, and see things fall apart as shittily as a flourless cake.

“Can Attachment Theory Explain All Our Relationships?” asked Bethany Saltman in New York Magazine a couple of years ago, well after the Time magazine cover with the breastfeeding schoolchild had made it seem as though attachment parenting was probably at its peak. I spent the first year of my daughter's life prodding her chest in the middle of the night to detect lung action, worried that turning my attention off her for a moment would see her turn into smoke. I kept her soul in that little body by force of thought. Not today, SIDS! I thought every night. And when I left my 4-month-old son to go frolic in the desert for a friend's bachelorette, I spent the entire time pumping and leaking milk, feeling weirdly loosey-goosey, like a system in shutdown. It felt too much like a hard end to something.

More than ever, parents believe that if we leave once, we forfeit the entire relationship.

This is at least partly true of Brodesser-Akner’s Rachel Fleishman. We can trace her ~condition~ back to the birth of her firstborn — the kind of grisly labor story documented by Meaghan O’Connell in And Now We Have Everything. Rachel gets it wrong right out of the gate. Here she is in the delivery room:

She saw in their eyes that she wasn’t acting normal and something bad would happen if she didn’t start, so she held her arms out.

Years later, despite having raised a securely attached tween, she still thinks back to these first moments:

She thought that everything that went wrong with Hannah — which was what? Tantrums sometimes? A refusal to eat pizza with a vegetable on it? Not liking ballet as much as Rachel had wanted her to? — was a result of the fact that she hadn’t immediately bonded with her. Her own mother, refusing to hold her.

There's a throwaway joke on Friends where Rachel, standing feet away from her baby, cries, "I miss her!" And that's the funniest thing about our shared neurosis: we're really doing a great job. Fleishman Is In Trouble gives us two lovable children whose fully formed characters arrive as mysteriously as our own babies: Solly, the sweet son, and Hannah, the more prickly daughter; each a little world.

How could you leave them? At the same time, how can you stay, if that means shattering?

The question of what we do with our discomfort seems to be all I think about sometimes as a person who spends hours each day editing accounts of the highs and lows of potty training, but, as Ferrante said, "Anyway, it passes."

Fleishman Is In Trouble is out June 18 from Random House.