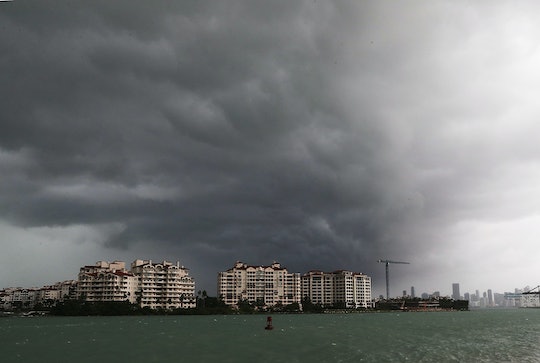 Pregnant Women Are Rushing To Hospitals Ahead Of Irma

The last weeks of any woman's pregnancy can be fraught with tension. Between the uncertainty of delivery, the preparation for bring the baby home, the exhaustion from carrying a person inside you for the past eight months or so... it can be a lot. Now add the possibility of a Category 4 hurricane careening your way, potentially cutting off your access to medical attention. And now we're talking stress. Some Florida hospitals are filling their halls with pregnant women as a precautionary measure for Hurricane Irma. Because they don't want any woman going into labor without care if they can help it.

While some hospitals have had to evacuate as Hurricane Irma moves away from Cuba and heads for Florida, three hospitals are adding significantly to their workload. According to The New York Post, around 130 moms who are 34 weeks or more into their pregnancies, or could be considered high-risk, are going to spend the weekend at three hospitals in the Broward County Memorial Healthcare System. But it won't exactly be a luxurious stay; these expectant mothers and their partners have been asked to bring their own beds as the hospital beds are being used for sick patients and any emergency issues brought on by Hurricane Irma. According to Memorial Hospital West obstetrician, Dr. Eric Freling, the decision to bring pregnant women to the already-taxed hospitals was a preventative one. He told The New York Post that:

Women in labor, and their partners, can’t be expected to rush to the hospital if the middle of a historic storm.

Freling also noted that the mothers, who will be housed in hallways and conference rooms (essentially anywhere there could be extra space) will have to largely care for themselves:

We ask them to bring their own bedding – lawn chairs, sleeping bags, blankets and pillows. We emphasize we’re not going to be able to bed them. We need to take care of patients who are acutely ill and those who will present themselves (during the hurricane).

While it's possible that none of these women will give birth this weekend, there is some evidence to support the possibility that hurricanes can cause a spike in laboring mothers. During Hurricane Harvey, the Category 4 storm that hit Texas in August, a Memorial Hermann Health System representative told Reuters that they saw five of their 11 labor and delivery units report an increase in deliveries, with three of those hospitals reporting double the usual numbers. In 2007, a report was released by the Archives of Gynecology and Obstetrics linking low barometric pressure (which often occurs during hurricanes) with spontaneous delivery. And 1,500 women gave birth during Hurricane Andrew in 1992, according to The Sun Sentinel.

As Hurricane Irma descends on Florida with wind speeds of up to 155 mph, torrential rains and potentially deadly conditions, these hospitals could struggle. Especially with 130 women packed into hallways and conference rooms, sleeping on air mattresses they brought from home.

We're wishing them all well.