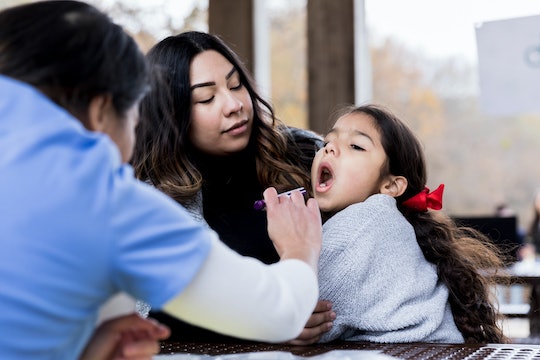 This Year's Dominant Flu Strain Is Most Dangerous For Kids

No parent wants their kid to get sick with the flu. Most people take precautions against it, of course, but sometimes it seems like the flu is a freight train careening down the tracks and there is simply no stopping it. This season is particularly worrisome, as flu B is the dominant strain for the first time in years, and it's hitting kids especially hard (and early). Parents need to be well prepared for this serious issue, to be sure.

It's not even the end of January just yet and already a whole lot of people are getting sick with the flu. But here's the thing that's got some health professionals concerned: It seems the B strain of the flu actually arrived considerably earlier than normal. A and B are the two most common strains of flu, according to ABC News, and "almost every year" the A strain hits first, with B showing up later in the winter. As Charlie Wetmore, Certified Pediatric Nurse Practitioner, told WTNH News 8, "We don’t normally see that until the second half of February. We began seeing it in the early part of December."

The Centers for Disease Control and Prevention (CDC) noted that flu activity is high in every state across the country and is expected to continue to remain high for the coming weeks. Contagion Live reported that the B flu virus has been the predominant one so far this season, for the first time since the winter of 1992-1993. What's more, kids are more at risk when it comes to the B virus. At the time of this writing, 28 of the 39 influenza-associated pediatric deaths that have occurred during the 2019-2020 flu season have been associated with flu B, according to the CDC.

Influenza B can only be passed from human to human and tends to be more contagious than the A strain, as per Healthline. The B flu's symptoms can also be more severe than those of the A strain, leaving the sufferer with respiratory issues, a sore throat, runny nose, fever, and body aches. As Prevea Health Center infectious disease physician Dr. Edward Morales explained to WBay.com, the B strain of fly typically hits children harder than the A strain. "The main difference is the populations that are susceptible," he said. "Usually kids are more susceptible to B strain, and adults are more susceptible to A strain." He went on to explain this could be partially attributed to the fact that young children are often less likely to do things to prevent the flu in the same way that an adult might, which is one of the first lines of defense against the flu:

There may be a situation with population, like children might be a little less inclined to use hand sanitizers or hand washing and good infection control practices, where adults may be more so, so that might be the reason why it seems to be more in one population than the others as well.

The good news is that the flu vaccine covers both the A and B strain of the flu virus, and while the vaccine might not completely protect kids from the flu, it will at the very least minimize the length and symptoms of the virus. The flu vaccine remains one of the best ways to keep your kids from getting sick (along with frequent hand-washing and staying away from other people with the flu).

Because no one wants their kid to get sick this winter if they can avoid it.

More Like This
New Report Shows 80% Of Pregnancy-Related Deaths Are Preventable
Is There Parenting Advice To Take From ‘Strangers To Ourselves’?
How Much Hair Loss Is Normal? 9 Signs You’re Losing Too Much Hair
What Does Amniotic Fluid Smell Like? A Nurse Explains