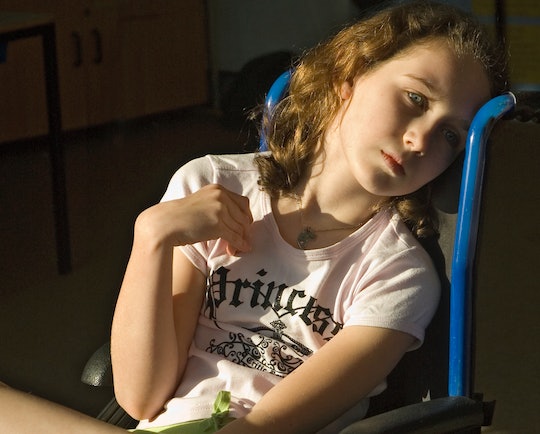 School This Year Looks Wildly Different For Each Of My Daughters

Like so many people, my family and I slipped into an abyss right around March 12 that we haven’t been able to crawl out from. As school “starts” again, I know my older daughter will be OK. She will roll with the punches. But Freyja, our younger daughter, can’t. In a school system that doesn't properly service her disabilities during distance learning, those punches could hurt her for a lifetime.

The education plan in our area has changed so many times that I’ve stopped listening for updates. I’ve heard it all so far: the teachers union here was lobbying for 100% remote but the state said no. Most of the parents want 100% in-person but there is a conversation developing around a 100% remote backup plan for those who don’t feel that schools are safe. The state pushed the start of school back by a couple weeks so they could have more time to think it through, which is shortening the school year instead of adjusting it. Next, our district administrators proposed a hybrid plan, which is what we expected, but then the question was hybrid how? The plan is five half-days per week for elementary school grades, confined to one classroom. At least, that’s the plan du jour.

It’s awful. All the options are. It sucks for the kids, for working parents, for parents who work in the home, for non-working parents who prefer not to have to homeschool, for people who can’t afford the necessary additional childcare, for the teachers who just want their regular jobs back, for the kids who want their regular lives back. At some point in May, my 8-year-old daughter Freyja sighed with exasperation after her third Zoom call of the day. With her disabilities, the alluring buttons and arrows that kids love to use to change their names and their backgrounds, to mute and unmute, to say silly things in the chat, are hard for her to use. She tries to keep up with her savvier peers and accidentally disconnects, turns her camera off, clicks out of the screen and can’t get it back. “I just want my life back!” she screamed after once such Zoom call, and burst into tears.

It is this child I worry about most. Freyja, who needs so much. Her disabilities are physical and they also affect her learning. She is easily fatigued throughout the school day, in part from having to move so much, and also in part from having to think so much. She receives many services at school; it’s impossible to know which is most important. She needs an aide to help her with her mobility and to help her access the curriculum. Without an aide she can’t focus or retain instructions. She needs extra resources for her academics. She misses a lot of school for doctors’ appointments and hospital stays, so she gets extra tutoring. All of this went by the wayside with distance learning. The one-on-one assistance stopped. She got no tutoring. There was no adult to assist her. That fell to us, and we soon discovered that I can’t work and homeschool at the same time, and that my husband does not have the patience to even try because “homeschooling” for her really meant constant hands-on I.T. assistance more than anything. We had to scale back. She attended the classroom meeting Zooms but not the specials. We made a rule of no more than two Zooms per day, so beyond the classroom morning meeting, she attended the ones that focused on reading and on OT. I ordered workbooks, project boxes, and art supplies. To stop beating myself up about this, I stopped looking at the daily emails with the assignments. Instead we got tutorials from her teachers for a handful of interactive apps she could use on her own. But it wasn’t enough. It was impossible to force her. Unless we wanted raised voices and more tears, there was no point.

Instead, she read. She has an app on her iPad that is an entire library of books uploaded on it — illustrations and all — that read them aloud highlighting each line like a karaoke track so she could read along easily. She refused to try most books but listened to the five Dory Fantasmagory books over and over and over. She practiced typing when I wasn’t using my computer, while I hovered to make sure she didn’t press anything dangerous. But both of those devolved into pressing buttons and fingers straying to the camera app, to search engines, to YouTube and Disney+. We found ourselves policing instead of assisting, which nobody liked. After some weeks like this, we hired a college girl also finishing her semester from home to risk her health and ours by coming into our house to help Freyja with her other learning apps, a little math, a lot of playing. We were happy that we weren’t relying on screens all day long to get through. But then COVID stretched on and on.

For kids who need special education, the gap between them and general-ed students is always precarious. With this shutdown, the gap will only continue to widen. It takes Freyja longer to acquire new skills even in the best of times. She thrives in an inclusive environment with typically developing learners. She sees them as role models. She looks to to her paraprofessional for reinforcement, instruction, and translation of anything she misses. She doesn’t find tutoring inspiring. She doesn’t find worksheets engaging. She wants to see her pals, but the stress of Zoom outweighs her willingness to participate.

If we return to school for half-days only, she will have intensive instruction for her academic subjects in the morning, and we will have to forget about doing specials remotely at home. If the state provides full day for kids like Freyja or if they provide a one-on-one period in the afternoon, she still misses out on the general education setting and time to connect with her peers, which for all children is critical but for Freyja is imperative. There are no easy solutions. COVID has introduced a setback in her education from which she may never recover.