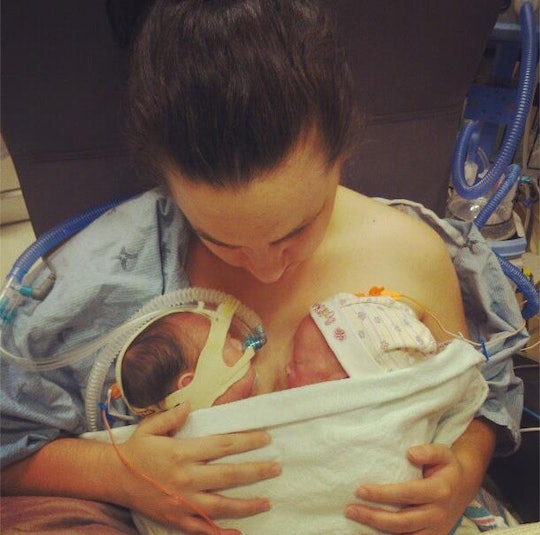 For Me, Breastfeeding Was A Life Or Death Decision

I used to be totally weirded out by the concept of breastfeeding. I knew it was natural, and that “breast is best,” and in theory I absolutely supported that and thought it was ridiculous that anyone could be shamed for breastfeeding their child. When I thought about actually doing it myself, however, I had major reservations. I didn’t like the thought of having to use my boobs to feed my kids and having to deal with things like engorgement and letdown and leaking, and I didn’t ever want to breastfeed in public or in front of other people. Not to mention that I’d heard so many stories about how difficult breastfeeding was and how much it could hurt, and I just couldn’t understand how anyone could truly be pro-breastfeeding. But when my twins were born prematurely at only 25 weeks gestation, I had to pump to keep my kids alive, and it completely changed my opinion of breastfeeding.

The morning my kids were born was so crazy and overwhelming that I felt like I was in a fog. A neonatology fellow from the NICU had come to talk to us the night before to tell us what to expect: after the twins were born, once (what she meant was if) they could be stabilized, they’d be taken to the NICU, and then placed in incubators. At some point, we’d be able to see them, but no one could say when (if) that would happen. After my delivery — one vaginal birth, and one emergency c-section 20 minutes later — I was taken to recovery without seeing or holding my kids. My husband joined me, and we waited there during the shift change, shell shocked, not really understanding what had just happened, even though plenty of doctors and nurses had tried to prepare us.

I had to attach myself to it so often that I felt chained to it, this stupid machine that gurgled and whirled and squeezed milk out of my breasts in a way that reminded me of cows on a commercial dairy farm.

The nurse in recovery — a young blond girl who seemed entirely too young to be the person in charge of taking care of me after what felt like such a disastrous event — explained that I’d need to start expressing breast milk immediately in order to establish my supply. Because I’d given birth so early, and because I didn’t actually have the opportunity to see my babies or hold them like most mothers (things that usually help get breast-milk production kicking in), I’d have to start encouraging it to happen a different way, by literally squeezing drops of colostrum out of my boobs and sucking them up in little syringes that would be taken to my babies. Matt and I looked at each other like, seriously, WTF is happening, as this young nurse grabbed my boob and showed me how to do this, as though it was the most normal thing in the world. And then she explained why:

It’s really important you do this every couple of hours, Alana, because your babies need your breast milk. It’s important for all babies, but preemies especially. Soon we’ll get you on a breast pump and that will help make sure your milk comes in. Don’t forget, you have two babies to feed.

Sure enough, it wasn’t long until I met the hospital-grade, double electric breast pump that would become a necessary evil in my life for the next few months. To say I hated that stupid thing would be a huge understatement. I had to attach myself to it so often that I felt chained to it, this stupid machine that gurgled and whirled and squeezed milk out of my breasts in a way that reminded me of cows on a commercial dairy farm. And I didn’t get a break at night either; I’d have to set an alarm to get up and pump every few hours then, too.

Being born so early meant that my children were at risk of developing something called necrotizing enterocolitis (or NEC), a serious disease affecting preemies where the tissue in the intestines dies. Although many preemies who develop NEC are able to survive, it's one of the leading causes of death in extremely premature babies. And babies who don’t receive breast milk are at a higher risk of developing it.

My milk supply, it soon became apparent, was not going to be enough to feed two babies, even if those babies were teeny tiny and requiring hardly any milk at all. Kind nurses and lactation consultants encouraged me to keep going, to not give up, and to try little tricks like watching TV while pumping to relax and stop focusing so hard, or to look at photos of my kids or smell their clothes while pumping to try and give my hormones a boost. I just wanted to give up. Wasn’t it enough that my kids were in incubators and hooked up to machines? Wasn’t that bad enough? Did I really have to do this miserable task as well?

The answer, it turned out, was yes — yes, I absolutely did. The nurse I met the day the children were born, the one who collected drops of colostrum out of my breasts with a syringe, was right when she said it was important for preemies to get breast milk. In fact, it was so important, that the twins were getting donor breast milk from the hospital’s donor milk bank as they twins outgrew my paltry supply. And it wasn’t because breast milk was “natural” or because formula was bad or evil (they later got plenty of that as well), but because being born so early meant that my children were at risk of developing something called necrotizing enterocolitis (or NEC), a serious disease affecting preemies where the tissue in the intestines dies. Although many preemies who develop NEC are able to survive, it's one of the leading causes of death in extremely premature babies. And babies who don’t receive breast milk are at a higher risk of developing it.

Even though I never wanted to do it, there was suddenly nothing I wanted to do more than be woken up in the night by a hungry infant I could feed with my own boobs.

Madeleine and Reid never did develop NEC, which was an incredibly huge relief. And they also did finally get strong enough to breastfeed. And when they did, it felt like a huge milestone. Where breastfeeding had once seemed like something I’d hate, it became something I looked forward to, an opportunity to do something “normal moms” got to do with their babies; this surprisingly lovely experience where I’d sit and stare at my beautiful, growing children snuggled in nice and warm on my chest — these little people that at one point might not have even lived long enough to do it. And while I still continued to pump here and there, being able to breastfeed meant that I no longer had to rely on my breast pump as the only way to feed my kids. It was joyous.

As for feeling embarrassed to breastfeed in public? Being unable to breastfeed for so long, and having to spend so much time wishing I could, made me care so much less about anyone else’s opinion about it. Breastfeeding was an accomplishment, a celebration of how far we’d come, and that overshadowed any doubts and weirdness that I’d had about it. When I finally got the chance to take my babies home and go out in the world with them, you bet I whipped out my boob in public when they got hungry, and I didn’t care at all what anyone else thought.

Unfortunately, our breastfeeding days were pretty short-lived. My daughter had brain surgery to correct a hemorrhage that occurred from being born premature, and afterwards she found it much easier to take a bottle. And shortly after coming home, my son developed a dairy intolerance that made him react badly to anything that wasn’t special, hydrolyzed formula. So we switched to bottle-feeding exclusively because that was right for us, and that was that.

But honestly? I missed breastfeeding. It was a special bonding experience, a privilege that I didn’t know I’d enjoy so much, or even be able to do. I won’t ever say that I’m grateful for my children’s prematurity (I would have chopped off both my arms to have been able to keep them in my belly longer), but I’m not sure I would’ve enjoyed breastfeeding if I hadn’t had to work so hard to be able to do it. If I didn’t have to wait so long. So that perspective, at least, was a gift.

I don’t know if I’ll ever have any more children, but if I do, you can bet I’ll be pretty psyched to breastfeed them. But hopefully I won’t ever have to hook myself up to a breast pump ever again.