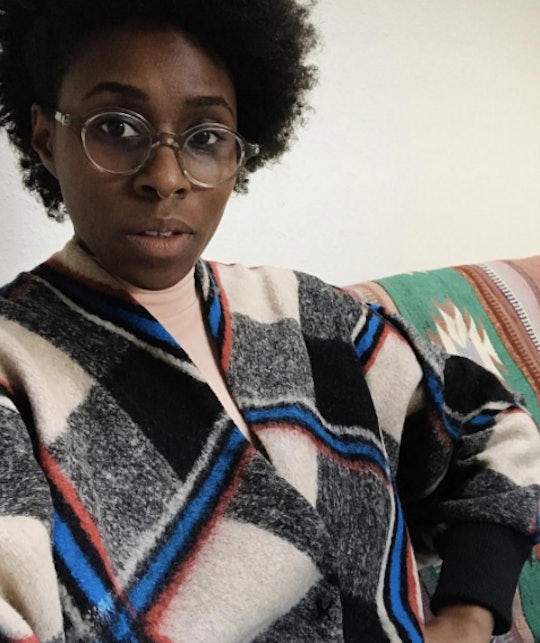 For People Of Color, The Whitelashing Of The 2016 Election Is Nothing New

In the fall of 2008, I gave birth to a baby girl who was both white and black, and in the same month, Barack Obama was elected President of the United States. The air, the people around me, the world — everything felt quite magical. President Obama had told us to "have hope," that the America he believed in could exist, so long as we were hopeful, so long as we believed. I was hopeful. I believed. I told myself that I'd just brought a child into a world that didn't focus on race anymore; I told myself I'd brought my daughter into a world that was focused on the process of moving forward, working together, and picking up pieces from the last 100 years of racism. One night, as I was breastfeeding my daughter and talking with my dad, I asked him if he ever thought he'd see a black man as president. He shook his head and told me no, but he wasn't filled with the same joy or appreciation I was. He turned to me and said, "Just wait until President Obama leaves office. There are many people who aren't happy this happened, many people who don't like black people or anyone who isn't white. They're going to make sure America goes back to the way they want it." His words made me shudder. I brushed it off, and continued to hope.

But two days ago, America decided the route we'll take. And the whitelashing of the 2016 election has shown me just how accurate my father's words were. That no matter how many have pushed, hoped, and advocated for hope, for belief, for change, we've been catapulted backwards.

My dads words have never left me. When 2012 rolled around and it was time to vote again, I felt nervous. I had this sinking feeling that America wasn't the melting pot filled good people that I'd long wanted to believe it was. Then Trayvon Martin was killed. Then Michael Brown. Then Eric Garner. There was a pattern. Why is this happening now? I asked my therapist the night after leading a peaceful rally. She pointed out that this wasn't new, the only thing that was different was our access to cameras, to computers, to social media. We had the internet to share these things, she told me. So I began researching the history of police officers and black folks in America.

I've spent the last two years consistently speaking to everyone about the black experience. Many times, it's to laughs, to people who say I'm "too sensitive," and that I need to "just get over it." No one wants to believe that white America isn't my America.

I accepted the reality that America had not become the post-racist utopia I'd hoped. I accepted that racism still existed, but I had to grapple with the facts before me: Racism thrived even with a black president. Racism was everywhere, even in my own state, even in beautiful Portland. But how? How could it? I knew the murders of innocent black men and children were not random. I knew they were not sudden. I knew they were part of a narrative that's been unfolding since black people were taken from their homes and from their placement on plantations centuries ago.

Slowly, my hope dwindled. I watched white friends deny that there was a war on my life, on the lives of my children. I felt my voice grow stronger, but also more hoarse. We had been convinced that our America was better than the America our parents were raised in. But we were wrong. This America — the one alive, well, and "thriving" in 2016 — is scarier. We'd been conditioned to believe we were all living in harmony. Nothing told us otherwise. Our president was black for, god sakes! As a country, we didn't talk about how capitalism is built on racism or about how systematic racism exists and is hurting us all. We thought that if we kept recycling, kept talking about being vegan, kept growing our own food, there was no way we could be racist. There was no way anyone could. We were "progressive." And yet, look where we are.

I've watched video after video of black mothers crying out to be heard. Mothers clinging to hope, despite the fact that the bodies of their children have been left in the street, despite the fact we are shown, time and time again, that black bodies do not hold the same value as white. I watched the video of the death of Philando Castile, where a black father was killed as his 4-year-old daughter sat in the back seat. In 2016 alone, I had to tell my kids about four different deaths of black people. I've spent the last two years consistently speaking to everyone about the black experience. Many times, it's to laughs, to people who say I'm "too sensitive," and that I need to "just get over it." No one wants to believe that white America isn't my America. That America isn't the land of the free, the land of equality. Because that's scary. That will dismantle all of the ideas many have built up about not only their country, but themselves.

Then Donald Trump, a man who bragged about grabbing women "by the p*ssy" became our president-elect. As the returns made it clear, all I could think was, This makes so much sense. This is the white response to the presidency of Barack Obama. We do not live in a post-racial America. This is our reality. But for black people in America, this is nothing new.

A few days before the election took place, someone told me to remember not everywhere is like progressive Portland. I pointed out that our city, our beautiful green city, has uprooted over 10,000 black folks over the last 10 years, has proudly worn the badge of being the whitest city in America, and refuses to acknowledge its abusive history with native and black folk. Using Portland as a metric is dangerous, but it's also actually the perfect example of the fake-utopia umbrella so many white people are able to live under. Just because white people don't walk around calling people "n*ggers" or openly attacking gay couples for holding hands doesn't mean there aren't problems in our world. But there are. And black people are asked to exist in this world every single day.

Over the last three years, I've spoken about the history my state has tried hard to bury and overlook. It's caused a lot of discomfort in the circles I run in, with the parents of kids my kids have playdates with, and with family. Even though it's exhausting, it's important that the people around me can't say they had no idea. But as of Wednesday morning at 1 a.m., that's all I see. Everyone is shocked. They're pointing fingers, placing blame, missing the point. Our country is still just as racist as it was when it was built. And that's a very scary and intimidating thing to see and to admit.

In the conversation I've had with my children about the election, we talk about the racism that keeps our country going, and my two brown children are aware that they must be active in their conversations about race. They know we need to keep marching and rallying. They know the work is not done. Sadly, I think many white families are just learning this.