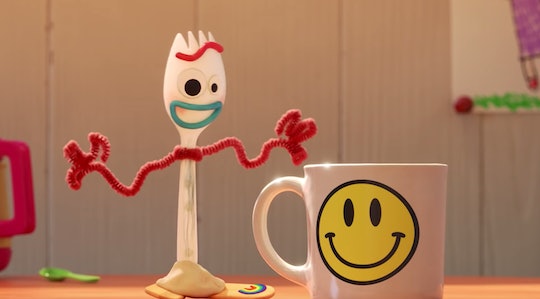 "What's A Friend?" Forky Tackles That Complex Question With A Simple, Yet Deep Answer

If your kids have watched Toy Story 4, chances are they fell in love with Forky. I mean, the new character is a spork who becomes a toy because Bonnie crafts him into one. What's not to love? His utter cluelessness about the world around him makes him so hilariously endearing. It seems only natural that Disney would give the memorable character his own mini-series on Disney+, called Forky Asks a Question, during which he continues to learn about life. For example, in a recent episode of Forky Asks a Question, the complexities of friendship are unraveled with a perfect, truthful explanation that's easy for kids to understand.

Even though Forky emphatically insists he's trash at the beginning of Toy Story 4 — as evident by a hilarious trash-driving montage — he eventually comes to realize the important role he plays in Bonnie's life. Still, he doesn't have much experience as a sentient being, and he still has so many questions about this new life he's living. Enter: Forky Asks a Question.

With the launch of Disney+ on Nov. 12 came the first episode of the 10-part mini series, starring the voice talent of Tony Hale as Forky, which is only available on the streaming platform. So far, three episodes of Forky Asks a Question have dropped for your viewing pleasure: "What is money?"; "What is art?"; and "What is a friend?" It's that last one that blind-slights viewers with a surprisingly deep, yet simple take about friendship.

Note: Spoilers for the "What is a friend?" episode of Forky Asks a Question are below.

At the beginning of the three minute episode, Forky ponders, "What is a friend? Hmmm. And to help me answer that is my good friend, WHATTT?! NOO!"

The camera pans to a ceramic mug with a yellow smiley face on it. (Forky has come to the conclusion that "WHATTT?! NOO!" is his friend's name because Bonnie's mom is always holding him while talking on the phone to her friends and exclaiming, "WHATTT?! NOO!") Forky then proceeds to dance with and tickle the mug, somehow managing to have a blast in the process.

"You do know that's just an inanimate ceramic mug, don't you?" Hamm casually points out while strolling by, shaking his head, and then continuing on his way.

"You know what? You taught me something," Forky says to the smiley mug. And here's where the naive spork drops a serious truth bomb:

I think I now know what a friend is: Someone you can just sit with and say absolutely nothing and still have the best time.

That is deep for a newly-conscious plastic utensil, of course, but it's so incredibly true. A friend is someone you can take along with you to run boring errands, but it somehow ends up being fun. It's driving over to your BFF's house only to sit silently together on the same couch, mindlessly scrolling through social media or zoning out to something on TV. You don't have to be experiencing anything groundbreaking or exciting. Just co-existing with them and doing mundane life stuff together enhances both of your lives.

Yes, this Forky Asks a Question episode is mostly ridiculous and silly. A spork is asking a gosh darn coffee mug about the meaning of friendship. But the three-minute crash course on such a complex topic is perfect for the attention span of young kids. If your kiddos are anything like mine, they are bombarding you with roughly 500 questions per hour, so why not outsource some of that responsibility to a Toy Story 4 character? Because for a clueless utensil, Forky is unexpectedly wise.

More Like This
Lyle, Lyle, Crocodile Is Heading To The Big Screen As A Musical Comedy
Adorable Fireworks Crafts To Celebrate The Fourth
'Caillou' Is Officially Getting A CGI Reboot Whether People Like It Or Not
Elmo Talks About Getting His Covid Vaccine In A Cute New Video