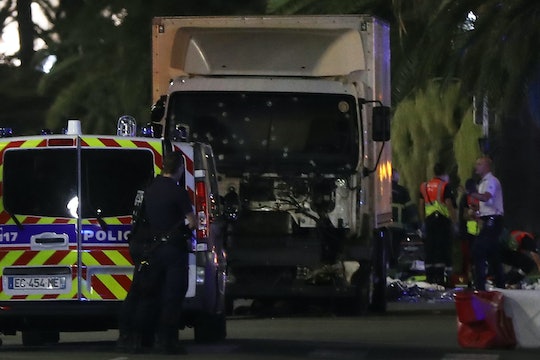 France Bastille Day Crash Is The Deadliest Since Paris Attacks

It should have been a beautiful night on the beach in the south of France, watching fireworks and celebrating the national holiday of Bastille Day. Instead, the evening turned into a nightmare. A careening white delivery truck drove through the thick crowd of revelers, killing at least 73 people and injuring many more. This is the deadliest crash that France has seen since the Paris attacks, and the country is reeling from shock.

Locals and visitors alike were watching the fireworks on the Promenade Des Anglais late Thursday evening (around 11:30 local time), a popular stretch of beach, when the white delivery truck headed straight for them. Witnesses reported that the truck aimed directly for the crowd, with "many, many" shots fired from the vehicle simultaneously. Pictures of the truck used in the attack show it pockmarked with multiple bullet holes. This is the deadliest attack France has seen since the Paris attacks happened in November of 2015 throughout several locations. ISIS militants claimed responsibility for the 130 lives lost in Paris, where multiple suicide bombers and gunmen orchestrated an organized attack on various cafes, restaurants and a music venue in Paris. The country has been slowly healing in the eight months since the attacks happened, and while local law officials have yet to report whether or not this was a terrorist attack, this tragedy certainly feels far too familiar.

The mayor of Nice, Christian Estrosi, tweeted that dozens of people had died and asked residents to stay indoors until further notice.

Considering the horrific scene that had been played out in the streets of Nice, most residents were presumably already planning to stay indoors. According to USA Today, one witness, Yves Lamorelle, told reporters,

Thank God we decided not to take the young ones. I am the only one who went. It was completely crazy, the crowd panicked and everyone was trying to flee.

He added, "I was having a drink but after a few minutes people started running toward us from the promenade ... Then all the cafe terraces started to clear out in a scary type of chaos. The tables, the chairs, the glasses got turned over. People were stepping on top of each other without even knowing why."

While the driver of the truck was shot and there have been reports that the vehicle was full of ammunition and guns, there has not yet been an official report. Law enforcement agencies have not reported whether the driver was working alone, or if the driver was part of any sort of terrorist organization.

And so, the world waits.