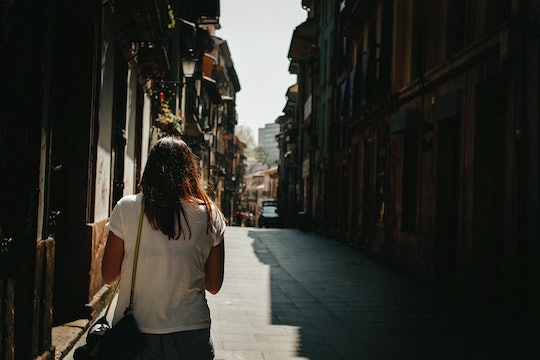 France Might Punish Men For Street Harassment, & It's A Step In The Right Direction

It is one of the great mysteries of life; men who think women might respond positively to being harassed on the street. As though any woman (I've ever met, at least) has found being "cat-called" or harassed charming or flattering on any level. It's aggressive and rude at the very least, not to mention alarming and invasive. And soon, it seems as though it could be illegal in at least one country. France might punish men for street harassment, and it's honestly about time everyone stood up to these street bullies.

France's Gender Equality Minister Marlène Schiappa introduced a series of new laws on Monday, aiming to protect women from being sexually harassed on the street. Schiappa's plan is to assemble a task force of politicians to work with police and other local officials to decide what should constitute sexual harassment. One of the proposed laws, which will be officially voted on in the new year, would punish men who harassed women on the street with on-the-spot fines. As Schiappa explained to France's RTL radio, creating laws to protect women from sexual harassment is:

...completely necessary because at the moment street harassment is not defined in the law. ... We can't currently make a complaint. When someone breaks into your vital space, talks to you within 10 or 20 centimeters of your face, follows you for three, four, five or six streets, or ask for your telephone number about 17 times.

Five lawmakers are looking over the proposed sexual harassment laws, which would also extend what we call a statute of limitations in the U.S., or the amount of time an alleged victim has to report the crime occurs. France has proposed expanding the limit to 30 years from the current 20 years after the assault. If the law is passed, France will join countries like Portugal, Argentina, and Belgium where catcalling is already illegal.

According to the British advocacy group Stop Street Harassment, around 65 percent of all women and 25 percent of men have experienced:

Catcalling and street harassment aren't new. But women and femme-identifying people have recently started speaking out more about being accosted on the streets where they live. Noa Jansma, a young student living in the Netherlands, decided to try a social experiment for a recent class called @dearcatcallers. Her class had a discussion about the nature of catcalling, and she told BuzzFeed:

I realized that half of the class, the women, knew what I was talking about and lived it on a daily basis. And the other half, the men, didn't even think that this is still happening. They were really surprised and curious. Some of them even did not believe me.

For one month, Jansma asked every man who harassed her on the street to take a selfie with her, and she wrote what they had said in the caption (for instance, the man in the photo above said, "I know what I would do with you, baby"). In one month, she took 24 photos... and all of the men were happy to have their picture taken with a woman they had recently harassed. Unaware, apparently, that they had done anything wrong. Jansma told BuzzFeed:

Most of the time they have their thumbs up, they're happy because they honestly think that they're complimenting me. They really didn't care about me. They never realized that I was unhappy.

As more and more women join the #MeToo campaign (sharing their stories of sexual harassment and abuse), as the Hollywood producers of the world are being held accountable, and as governments are beginning to take the every day threat of street harassment seriously, it seems the world might be shifting. To a place where, as Schiappa told Le Croix newspaper:

The idea is that society as a whole redefines what it is acceptable or not.

Sexual harassment, in the street or the office or the home, is not acceptable. And it's never, ever a compliment.