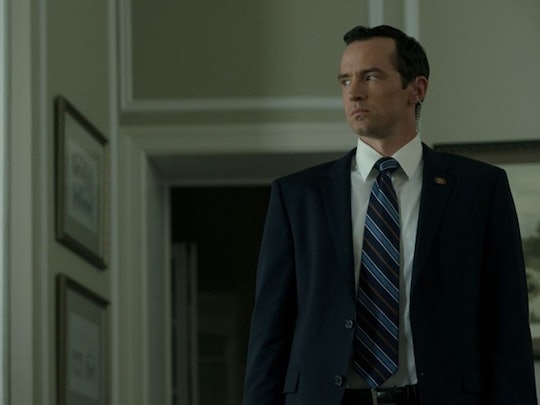 In the wake of Lucas Goodwin's assassination attempt on Frank Underwood, the White House staff became very, very busy. Claire is busy working on her Universal Mandatory Registration Bill — to ensure all guns are registered — and generally pissing off the NRA. Frank is busy pretending to look for a new running mate now that yawn-fest Donald Blythe is out of the picture. Leann and Doug are busy with their battle of wills. But in the midst of all that craziness, Frank remembers Meechum, his fallen friend on House of Cards.

Edward Meechum has been gone for three episodes at this point (spoiler for Episode 8, Season 4 coming at you!) and we all deeply miss him. His stalwart loyalty to the Underwoods was almost never in question — except maybe that moment when Seth tries to pin his own betrayal on Meechum, and Frank looks in his eyes and just knows... perfect.

But Meechum is gone now, guys. We all have to accept it. We will miss him. Even Frank, scheming climber that he is, misses him.

As a sign of his love and affection for his fallen friend and former lover, there's a sad, heartbreaking moment where Frank searches for Meechum's handprint on the wall. Earlier in the season, Frank and Meechum are looking at some artwork featuring the Rebel flag. Frank finds it distasteful, particularly after the whole KKK billboard fiasco, and decides to replace it with something infinitely finer: Meechum's handprint. They share a sweet little giggle and an intimate moment and then go about the business of ruling the world.

When Frank is passing the same spot where a picture now hangs, he moves it to look for Meechum's fingerprint. It's gone — likely painted over — and that clearly wrecks him. He touches his fingertips to where Meechum's hand once was, and pauses. His step is slower, less sure. Later on, he tells Claire about it. She gets it. She tells him:

There are very few people who understand us. Meechum... was one.

She has an idea to replace their lost Meechum with author Tom Yates. But I have a feeling he'll be too crafty, too full of self-interest, to ever hold the same place in the Underwoods' hearts as the Secret Service agent did.

It's a rare thing, seeing Frank Underwood's humanity trump his passion for the diabolical. When he first spoke to Claire after coming out of surgery, "Meechum?" was the first person he asked for. And the sad moment in the hallway, where Frank searches for a physical reminder of his friend, shows that beneath all the manipulation and the deceit is a man who feels deeply the loss of someone he cared for.

There won't ever be another like Meechum. And poor Frank knows it.