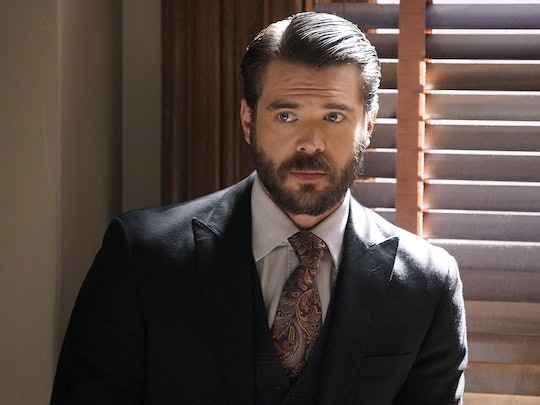 No one was ever under the impression that Frank on How To Get Away With Murder led a charmed childhood or grew up in a happy home, but until now, we hadn't been given much insight into his past. Now that we have, though, Frank's backstory on How To Get Away With Murder has shed some light on his past and what led him to the life he lives now. Which, if you missed the memo, is one full of crime and criminal cover-ups, which started at a very early age.

As we saw in Thursday's episode of HTGAWM, Frank first met Annalise when Sam wanted to take a chance on him and help him get out of prison for trying to kill his father. Adult Frank is much more well-rounded and, as we've seen when he had Laurel over to meet his family, he's pretty close with them these days, but Frank's youth was apparently full of darkness back when he was as young as 13 years old.

It's not really surprising that, as a kid, Frank was breaking the law and in and out of jail from the time he hit puberty, but being taken under Annalise's wing didn't exactly turn him around.

Sure, he was able to stay out of prison and lead an important kind of life, but being Annalise's surrogate son and right hand man also made a hitman out of him. And one who was into intimidation and hiding murdered bodies, no less. Would Frank have ended up differently had Annalise and Sam not saved him from prison 11 years ago? Honestly, he probably would have still led a life of crime, but maybe a little less complicated than all of the murder cover-ups we've seen him participate in.

Sam told Frank in the flashback on Thursday's episode that he knew the crime was an accident, and it was clear that Frank felt remorse for what had happened with almost killing his father. When Sam told him, "You have good in you," it's totally fine if you shed some streams of tears, but the point is, Sam saw some good in Frank, which helped mold him into someone different.

In a way, maybe we should feel bad for the obviously dark past Frank has on How To Get Away With Murder and the fact that he still ended up living a life of crime. But it's also hard to forget all the bad things he's done on this show. At least now we can understand a little bit more about how he came to be the man he is today.