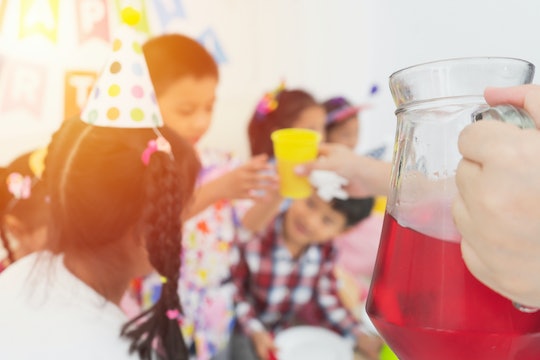 I was not a good birthday party mom. There, I said it. I was a single mom with four sons so I mostly got a pass. But, to be honest, even if I had been a super affluent mom with one kid in a supportive relationship I also would have been crap at birthday parties. I just forget stuff all the time, it happens. So it's nice to know I'm not alone after many years of feeling very alone in my failure. Really, this "frantic" mom's birthday invitation is a soothing balm to my fractured parenting soul, especially since the response on social media was surprisingly positive.

Now before I get into this woman's desperate 11th hour plea for birthday party guests, it seems like a good time to point out that birthday party culture in North America is, umm, pretty wild. As a 2016 Washington Post article pointed out, there is an expectation level for parents to throw lavish birthday parties that pretty much no one could live up to and I'm not even sure they should be expected to try. Rather than looking at a child's birthday party as a time to celebrate and eat some cake, they've become a way to measure each other's parenting skills. And perhaps it's time for a change if this harried mom's invitation is any sort of barometer.

As the mom wrote in her invitation, she had booked her son's birthday party "several weeks ago" and then forgotten to send invitations out to his friends. "So here we are less than a week away, and I'm just now inviting your kid to [name protected]'s birthday," the invitation reads. "Hopefully even with this terrible short notice, you can make it to [name protected] which is a nerf gun arena type place."

She admitted that she hadn't done any research but don't worry parents, "Google made it seem promising."

While this desperate mom hoped that parents might RSVP by Friday night, she totally understood if they were going to be late. Because as she acknowledged, "Same here, parent. Same here."

Now I had my concerns that this letter would receive intense backlash because of the dreaded mom-shaming trend, but it seems there's another trend on the internet that makes the invention totally worthwhile. It seems plenty of parents wouldn't mind letting go of the ever-increasing birthday party expectations, which a 2019 BabyCenter survey found sees 25 percent of parents spending between $200 to $500 on every year. These rebellious parents took to Reddit in support of this "frantic" mom, sharing their own stories and letting her know everything was OK.

One fellow parent commented, "ok now I don't feel so bad that our invites for next weekend are going out tomorrow haha."

Another said, "I've had a neighbor show up at my door at 9PM on a Friday night, inviting us to a birthday party at 10AM the next morning. Complete with last-minute printed invite and sheepish look. We've all been that mom."

That's exactly right. We have all been that mom. I've been that mom, my friends have been that mom. And it turns out there is nothing wrong with being that mom. Because we're all traveling the same road so why not hold each other up when we're having a rough time? It makes things way more fun... even birthday parties.