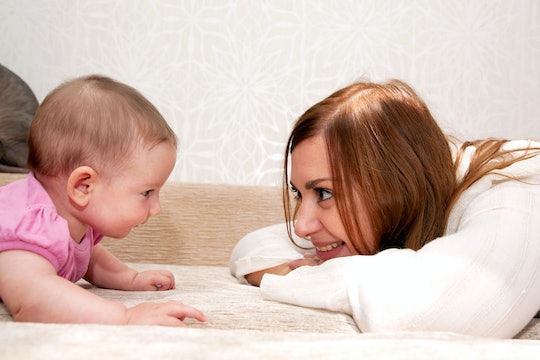 Here's One Thing You Should Always Do While Talking To Your Baby, Science Says

If you Google "communication" and "babies" you'll be treated to a ton of articles on how to best advance your baby's communication skills. Some recommendations are more time consuming than others, which can be daunting to a new parent who is just trying to make it through the dang day. If you fall into this category, you'll love this study about how parents can develop their babies' communication skills with frequent eye contact. Sounds fairly easy and cute, right?

A study published in the Proceedings of National Academy of Sciences (PNAS), found that when a parent makes a lot of eye contact with their baby, their brainwaves are more synced up with one another, according to Science Daily. Researchers at the University of Cambridge came to this conclusion after examining the brainwaves of 36 infants in two separate experiments (17 in the first trial and 19 in the second). The babies wore skull caps during the trials to measure the electrical activity and signals of their brains, a process called electroencephalography.

In the first round of the experiment, the infant watched a recorded video of an adult singing a nursery rhyme. The adult, whose brainwaves were previously recorded, looked at the infant for a period of time before turning her head away. Towards the end of the video, the adult reestablished eye contact but maintained a turned head.

Researchers conducted the second trial live, which gave them the opportunity to see if the adult and infant's brainwaves played off of one another.

Researchers determined that the adults and babies' brain activity were more in sync with each other during the eye contact phase of the experiment. Furthermore, researchers found that when the adult turned her head but still maintained eye contact, infants made more of an effort to "communicate" and to sync their brainwaves with the adult's. Researchers measured an infant's attempt to communicate by how many "vocalizations" they made during the experiment, according to Business Standard.

As for why the babies strongly responded to the turned gaze with eye contact, researchers believe it's because infants can recognize signals of communication, according to The Telegraph. So, even with a turned head, infants can tell you want to communicate if you maintain eye contact. The finding suggests infants are incredibly observant and are adept at picking up on non-verbal cues that are crucial to their development.

Dr Victoria Leong, the lead author on the study said, according to Science Daily:

When the adult and infant are looking at each other, they are signaling their availability and intention to communicate with each other. We found that both adult and infant brains respond to a gaze signal by becoming more in sync with their partner. This mechanism could prepare parents and babies to communicate, by synchronising when to speak and when to listen, which would also make learning more effective.

This study has similarities to another recent study that found that 10-month-old babies can understand the meaning of words. Researchers determined that babies can better understand the meaning of a word when a parent is pointing to or looking at the object the word represents. It just goes to show that babies are always paying attention, and that parents can use that attention to their advantage when it comes to early development.

Most importantly, it proves that early development can be enhanced by simple things you do in your everyday life. Parents typically talk to and make eye contact with their infants many times a day, and it's probably reassuring for parents to know that these small acts are contributing to their baby's growth and development.

So, the next time you're having a deep conversation about the meaning of life with your infant, be sure to make eye contact.