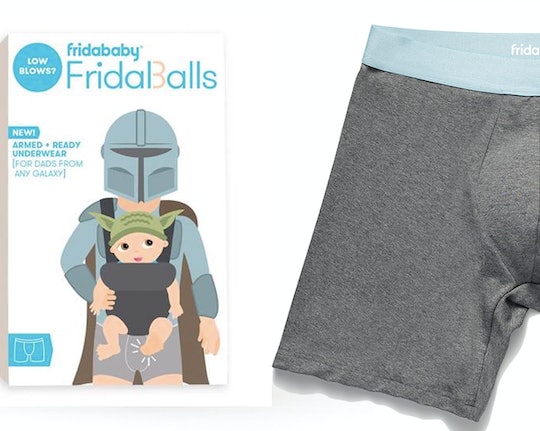 When it comes to the long list of bodily changes that come with womanhood, I have a hard time not rolling my eyes when men complain about pain inflicted upon their family jewels. No, I don't wish ill upon their precious pair, but I don't spend time thinking about how to safeguard them. I guess blood, stitches, and an entire human being making her exit has made my vagina kind of jaded in that way. But that's not to say this pair of underwear from Fridababy to protect dad's privates didn't have me curious.

I mean, initially I thought: Is this an April Fool's joke? But then I realized, no, we are indeed discussing FridaBalls, underwear designed to shelter a man's testicles. "Having kids is great — but being a dad can be a contact sport," the company wrote in its news release.

But I'm not a monster. I don't want my husband's (or any man's) testicles to be compromised as a result of a kid's head straight to the scrotum. So, I watched the informational video about the underwear, which were designed by the same company that created the ultra-popular NoseFrida, the nifty mechanism that helps you (literally) suck snot from your stuffy baby's nose. Clearly, they nailed it with that creation because they created a cult-like following among parents who swear by it. So, maybe they are on to something with this whole balls-protecting-undergarments thing.

Using a built-in reinforced flexible foam, the makers of the world's first kid-proof underwear say they protect against head butts, a swinging heel dangling from a baby carrier, Sunday morning bed jumps, or a super eager welcome home. And, man, are there perks to keep their cojones feeling fresh and free, including breathable wicking fabric, a never slip secure waistband, and a patent-pending Heirloom Conservation Technology (HCT) which is said to successfully "add branches to your family tree." The underwear is available in sizes S/M and L/XL for $28 at fridababy.com.

I have a feeling the company senses some people might have my initial reaction to the product because their promotional video ends with: "Protect your legacy. Yes, this is real." Which is, perhaps, the genius behind the product because it mashes together a fear that I would guess ranks in the top 10 for most men with a dash of we-had-this-idea-that-just-might-work humor.

If you're wondering why it hurts so bad to get hit in the testicles, then here's your answer: "The scrotum and testes are pretty much a nerve bundle," Dr. Jamin Brahmbhatt, co-director at Florida-based The PUR Clinic, told Men's Health. Which is good news when it comes to sexy time, but not so hot when it means your kid's foot to your groin.

I do feel like, however, that it should be noted that Brahmbhatt also told Men's Health that, "Honestly, childbirth still wins as the worst pain." Which really leads me to my second thought upon learning about these underwear: Why are women still crafting padsicles for their postpartum vaginas, but men have these underwear available to them?

Fridababy, can I request a FridaVag? Let's get together and make some magic — I have a feeling you'll have a customer or two.

This article was originally published on June 6, 2018