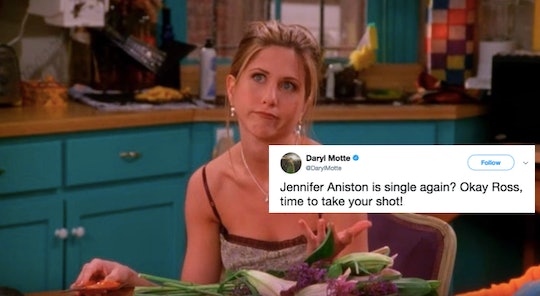 Just one day after Valentine's Day on Feb. 15, fans who've had crushes on Rachel Green for decades had *a lot* of emotions to deal with when they heard that Jennifer Aniston and Justin Theroux split up. Friends fans were shattered by the news, but it's surprising just how many Friends-themed tweets and memes they had locked and loaded following the couple's breakup news. It's devastating, indeed, but Twitter promptly swooped in to help us cope with it all. Because, I guess, he just wasn't her lobster, right?

The couple confirmed the news in an official statement to the Associated Press on Thursday, which just so happened to come on the heels of Aniston's 49th birthday. "In an effort to reduce any further speculation, we have decided to announce our separation," the statement read. "This decision was mutual and lovingly made at the end of last year. We are two best friends who have decided to part ways as a couple, but look forward to continuing our cherished friendship."

Almost instantly, Twitter blew up with tweets of heartbreak and shock. After all, Aniston and Theroux's relationship over the last several years has been a beautiful thing to witness. But rather than sit in sorrow and wonder why oh why did this happen, why not join the folks on Twitter who are using plenty of memes and tweets from the most iconic Friends moments to help cope with the news? Twitter's there for you... clap clap clap clap!

Remember when it was the beginning of Ross and Rachel's mutual affection for each other? When Rachel realized she had feelings for Ross, he was with girlfriend Julie. Then, a stupid pros and cons list split them up. BFF Phoebe insisted that they were sole mates, telling Ross that Rachel was his lobster. She even convinced him to show her "the claws". This didn't convince Rachel to be with Ross ... but an old prom video, where Ross offered to step in as Rachel's date, is what won her over.

Some Aren't Too Sure If They're Maybe Just On A Break?

When Ross slept with another woman, he and Rachel had just had a fight and she was hanging out with a guy from work who had the hots for her. After Rachel found out that Ross had sex with someone else, this is when the real breakup went down. Ross' infamous argument was, "We were on a break" and it carried throughout the series.

And it still seems to be carrying weight with Aniston and Theroux's devastating news on Twitter's minds.

Friends ended after 10 seasons in 2004 and fans are still shipping Ross and Rachel... Who could blame them though?

If Not, Fans Had Another Theory

No, no, no... Not Joey. Although he and Rachel did date each other temporarily on the series. But whether that storyline should've actually happened is still hotly debated amongst Friends fanatics.

Almost instantly after Aniston and Theroux's separation news broke, fans quickly theorized that she and her ex-husband Brad Pitt would get back together. But, if Aniston is thinking anything like Rachel, then that's probably, most certainly not what's going on.

Just like it did with Ross and Rachel circa 1999, it'll take some time to recover from Aniston and Theroux's split. But thankfully there are always plenty of Friends reruns on Netflix to binge in the meantime.