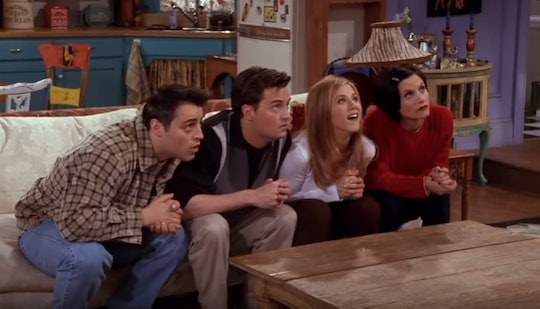 "Oh My God!": A 'Friends' Reunion Special Is Reportedly Happening

It's the thing we've all been hoping for ever since Central Perk closed its doors for good in 2004. Yep, a Friends TV reunion is reportedly happening and it's obviously Friendsgiving miracle.

The Hollywood Reporter and Variety both recently reported that HBO Max and Warner Bros. are putting together a Friends reunion special with the six main stars: Courtney Cox, Jennifer Aniston, Lisa Kudrow, Matthew Perry, Matt LeBlanc, and David Schwimmer. Now, if you're hoping to see the gang all pile back into Monica's old purple apartment to get embroiled in some sort of mischief, you might find yourself disappointed.

While Romper's request for comment from HBO Max and Warner Bros. was not immediately returned, sources told The Hollywood Reporter that the reunion is expected to be a live, unscripted special featuring the cast along with series creators David Crane and Marta Kauffman.

Rumors have been swirling about the possibility of a Friends reunion for two decades, almost immediately after the last episode aired, but Aniston appeared to unwittingly stir the pot with her very first Instagram post. On Oct. 15, the actress shared a photo of all six cast members and basically broke the internet. "And now we’re Instagram FRIENDS too. HI INSTAGRAM," she captioned the photo.

As if seeing a photo of the six Friends hanging out as real life friends wasn't exciting enough, Aniston gave fans another reason to be hopeful. On Oct. 28, she opened up about reuniting with her former cast mates during an interview with Ellen DeGeneres, telling her that she and the rest of the cast were "working on something," and that they all hoped they could make it happen. "We would love for there to be something, but we don't know what that something is," Aniston said. "So we're just trying. We're working on something."

Aniston wouldn't confirm precisely what the Friends reunion would look like, nor have either one of the studios attached confirmed any details. However, as Variety reported, any sort of reunion is in the very early stages of planning. Technically this would be the second reunion, since the six cast members did get together for a tribute to producer James Burrows in 2016, though that was just an interview.

That being said, it certainly makes sense for the show to finally do a reunion soon. Especially considering how popular it has become with an entire new generation of viewers who made it the the most streamed series on Netflix in 2018, according to CNBC. However it happens, I think we can all agree on one thing: It really needs to happen soon. They did promise they would be there for us...