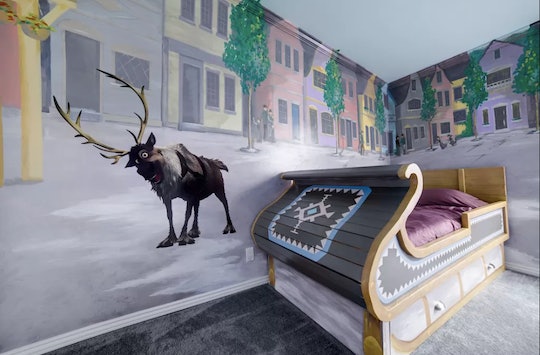 Hi, Hello: You Can Rent One Of Many 'Frozen'-Themed Rental Homes For $216 A Night

Did you dress up in full costume for the Frozen 2 premiere? Can you switch from singing "Let It Go," to "Into The Unknown" without missing a beat? Build any Olaf snowmen this season? If you answered yes to any of these questions, boy have I got news for you. These Frozen-themed vacation rentals will making going into the unknown a reality. What's more, one could cost as low as $15 per person per night.

Frozen 2 premiered on Friday, Nov. 22 and brought in a box office record breaking $127 million in North America alone, according to CNN. Additionally, the film set the record for largest global opening of any animated film, making $350 million worldwide. This success is evidence that the public can't get enough of Elsa, Anna, and the rest of the gang — and who can blame them? The new film is fabulous.

The Frozen-themed properties — listed on Vrbo and located near Disney theme parks in both California and Florida — are all themed to match the movies' wintery wonderlands and royal digs. If you're heading to Disney any time soon, you may want to consider staying in style. Even Queen Elsa couldn't turn her nose up at these gorgeous accommodations. But don't take my word for it, browse below and see for yourself.

Boasting a splash pad and movie theater villa, this mansion in Kissimmee, Florida averages $407 per night and sleeps 16 people between its seven bedrooms and six bathrooms.

Located in Reunion, Florida, this massive villa can sleep up to 22 people between its nine bedrooms and nine bathrooms. Rent it for an average of $882 per night.

Not only do Elsa and Anna make an appearance here, but R2D2 and C3PO can be found on the grounds as well. Experience the best of both worlds at this Champions Gate, Florida villa and enjoy the massive game room as well. It averages $216 per night and can sleep as many as 14 people between give bedrooms and five baths. If you can wrangle 14 friends, this rental will only set you back $15 a night.

No need to fear the cold in this Anaheim, California pool home. Its Frozen rooms can sleep up to 26 people between 10 bedrooms and six bathrooms. It averages $950 per night and is located near Disneyland.

You'll be right around the corner from Disney World in this Kissimmee, Florida luxury home. With murals for days, it averages $377 per night and can sleep 12 people in five bedrooms with four-and-a-half baths.

Get comfy close to Disney in this themed villa in Kissimmee, Florida. Averaging only $306 per night, you can sleep 15 people here in seven bedrooms and have use of four-and-a-half baths. If you've got 15 people in your Disney group, this place will run you about $20 a night.

Who knew you and the fam could be sleeping like Arendelle royalty, too.