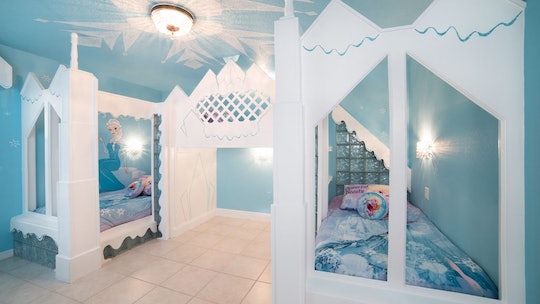 Frozen super fans, your next getaway is about to plan itself. An amazing Frozen-themed vacation house in Kissimmee, Florida is taking bookings, and it'll transport you straight to Arendelle.

Officially named "Olaf's Frozen Funhouse," the rental is available on Vrbo.com for $400 a night (plus cleaning and service fees that may vary). It has everything a Frozen afficionado could ever ask for, including a prime location — it's just three miles from Disney World, making it a great place to stay when you're visiting the Most Magical Place on Earth.

Three of the house's bedrooms are perfectly decorated for kids. Little ones can choose between Sven’s Sleigh (with two amazing sleigh beds, naturally), Elsa’s Ice Castle (with two adorable white beds connected by a third loft bed) and Oaken’s Trading Post (featuring a loft bunk bed). All three feature amazing murals. For the grownups, there are four master bedrooms with fun touches like quotes from the movie emblazoned on the walls. If you're counting, that adds up to seven bedrooms that can easily sleep 16 people.

The luxurious Frozen-theme goes beyond the bedrooms, too. There's a 10 person home-theater, where you'd obviously want to screen all your favorite Disney movies. There's a pool and splash pad for kids to beat the Florida heat, and a jacuzzi for the adults. You could have a spectacular vacation without ever leaving the property, it seems. If you completely fill up the house, the $400 a night price tag equals just $25 per person. I am seriously ready to book right now, TBH.

Something tells me interest in this house is going to heat up as the sequel gets closer. A brand new full-length trailer for Frozen II dropped this week, and immediately racked up millions of views. The film doesn't come out until November 22, so fans will have a few months to feverishly speculate about the plot. Details have been pretty scarce so far, according to Billboard, but Elsa and crew are thought to be heading out on a quest to reveal the roots of her magical powers and protect her kingdom in the process.

The original Frozen was a smash hit (I mean, it would have to be to inspire people to design an entire 4,000 square foot house around it, right?), making over a billion dollars at the box office, according to Business Insider. As one of Disney's most successful franchises, CNN noted that the movie earned a namesake ride at Disney World. Imagine waking up in the Frozen house, then taking the short trip over to Epcot for a spin on Frozen Ever After? I know a few kids (and lots of adults, too) who'd call that a dream vacation.

If Frozen doesn't crack your top five favorite Disney flicks, Vrbo has a bunch of other houses with dreamy decor. There's this princess and Pixar-heavy option, and this rental with a Mickey Mouse clubhouse and a pool fit for The Little Mermaid. Any one of these homes is perfect for making magical memories with the whole family.