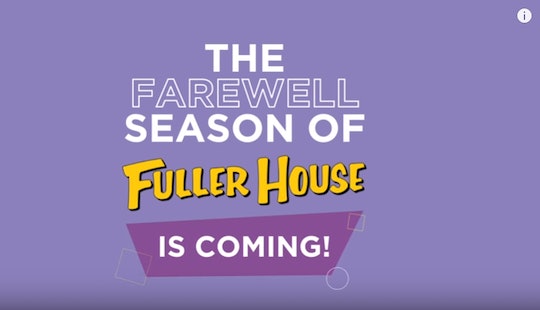 'Fuller House' Will End After Season 5, So No More Uncle Jessie

There was a time when we never thought we would see the Tanner family again: When we assumed that the end of Full House, the story of a man trying to raise his three daughters with the help of his best friend and hot brother-in-law Uncle Jesse, was the end of life with the Tanners for good. But then we got Fuller House, a special surprise. Now, sadly, even that has come to an end. Fuller House Season 5 will be the last one, and I guess on some level we should just be grateful we got more time with them at all. Probably especially Uncle Jesse.

Netflix announced on Thursday that the newest season of Fuller House would also be the farewell season. This super popular spinoff of the original ABC series Full House which ran from 1987 to 1995 has introduced us to grown Tanner daughters DJ (Candace Cameron Bure) and Stephanie (Jodie Sweetin), although we were unfortunately never treated to adult Michelle Tanner, who was played by twins Mary Kate and Ashley Olsen. The two older daughters moved back into the family home in San Francisco to raise their families, but the Michelle character was noticeably absent (allegedly running a fashion empire in NYC). But maybe we'll finally get to see adult Michelle Tanner in the last season... after all, Netflix has promised they saved the "best for last" with this new season in a just-released trailer.

There were actually rumors that the series would end after last season, but Cameron Bure told E! News that this was not going to happen. In fact, she was so excited about playing the iconic role of DJ Tanner-Fuller that she told the media outlet she would love to play her "forever" back in November:

Oh my goodness, I would play DJ Tanner for the rest of my life. If the audience wanted it and the networks wanted it, I would do it forever. I love her. I love our Fuller House family, and we really are family off screen. The more I get to be with them every day, whether it's working or just in everyday life friendship. It's just incredible, so keep watching! Give us a season five!

Well, we got a fifth season. But fans are pretty bummed to learn this is going to be the end of an era.

No word yet on how many episodes fans can expect from the fifth and, I say again, final season of Fuller House on Netflix, as Variety reported. One more season to connect with the whole Tanner clan including DJ's old high school boyfriend Steve who came back for Fuller House so they can be in love again. Uncle Jesse, of course, played by John Stamos, Bob Saget playing patriarch Danny Tanner, and Dave Coulier playing Joey (he's my least favorite, sorry but it's true).

At the end of the day we should just feel gratitude that we got five whole seasons of Fuller House. That being said, if the Olsen twins can come back for just one episode... so many lives would be complete.