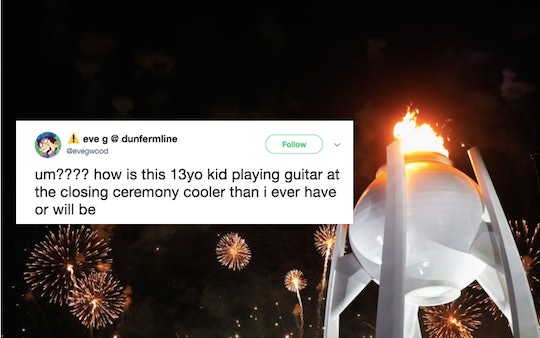 Here's the thing about the Winter Olympics: it seems like they're over in a heartbeat. After all of the debate beforehand, all of the discussion and the training and (in the case of this year's Winter Games in PyeongChang, at any rate) controversies along the way, the games feel like they're over before they've even begun. Just yesterday, it seems, everyone was tweeting about the opening ceremony at the 2018 Winter Olympics, the shirtless flag bearer from Tonga especially. Now it's over, and the tweets about the closing ceremony are coming in fast and furious. Like that last sliver of sun before it sets and the long night returns.

After two weeks of exciting performances by outstanding athletes, from the United States and beyond, the Winter Olympics has ended one of the largest Winter Games in recorded history. This year's Olympics saw a full 92 countries participate in the games, with a record-setting 2,920 athletes competing in events like ice dancing, Nordic skiing, and snowboarding. It was a big year for the United States, particularly when snowboarder Shaun White making a big comeback after a disastrous injury to win his third Olympic gold medal, which also happened to be the 100th Olympic gold for Team USA.

There have been other standouts along the way as well, of course; after a fairly dismal start to the Olympics, skater Nathan Chen made history. He landed a six quadruple jump routine for his long program after coming in 17th in the men's short program earlier in the week, and fans were here for it. Even Hamilton creator Lin-Manuel Miranda was celebrating, which might have even put Chen on the short list for some tickets to see the show if he's lucky.

As the closing ceremony got underway, people were ready for a lot more of the same sort of futuristic mysticism they'd seen at the opening ceremony just two weeks ago. And they were really ready to compete in the Twitter games (which I just made up) to pull together the funniest tweets about the ceremony.

There were a few highlights from the closing ceremony that people couldn't help noticing. One of the greatest? The amazing 13-year-old guitar prodigy Yang Tae-Hwan, who basically stole the show by shredding his solo while also wearing an amazing turtleneck and having the best hair ever.

He was so great he basically made everyone wonder what they'd been doing with their lives.

Then there was the beloved K-pop band Exo, whose performance wasn't just amazing, it apparently helped open one Twitter user's third eye. So that's something.

Not all of the attention at the closing ceremony of the 2018 Olympics was on the athletes or even the musicians though; when South Korean President Moon Jae-In took in the proceedings with North Korean General Kim Yong Chul and first daughter Ivanka Trump, people couldn't stop themselves from commenting. Especially considering the history of animosity between the countries each person represents.

Lee Hee-beom, the president of the PyeongChang Olympics organizing committee, took note during the closing ceremony of the potentially positive outcome of this new relatively unified front.

The seed of peace you have planted here in Pyeongchang will grow as a big tree in the not-distant future. The hope and aspirations of South and North Korean athletes together with cheerleaders will definitely serve as a cornerstone of the unification of the Korean Peninsula.

Of course, people had their own feelings about the presence of Ivanka Trump, adviser to President Donald Trump and something of a controversial figure herself to the people back home.

Even to the athletes competing, in point of fact. Like freestyle skier and Olympic favorite Gus Kenworthy taking to Twitter to rake Ivanka over the coals for her presence.

Kenworthy wasn't the only one to speak up about Ivanka Trump's presence at the Olympics.

It wasn't all heavy and political at the closing ceremony; as a lovely little surprise, fans were treated to another viewing of the only Olympic athlete to compete from Tonga, the famously shirtless and well-oiled cross country skier Pita Taufatotofua.

The Tongan flag bearer and cross-country skier posed alongside Olympic medalist Lindsay Vonn, and just made everyone really happy.

Another year of the Winter Olympics has come and gone. The torch has been extinguished, ready to move on to Beijing, China in 2022. But let's all just take a moment to really embrace the wonder and beauty that was the PyeongChang Winter Games.