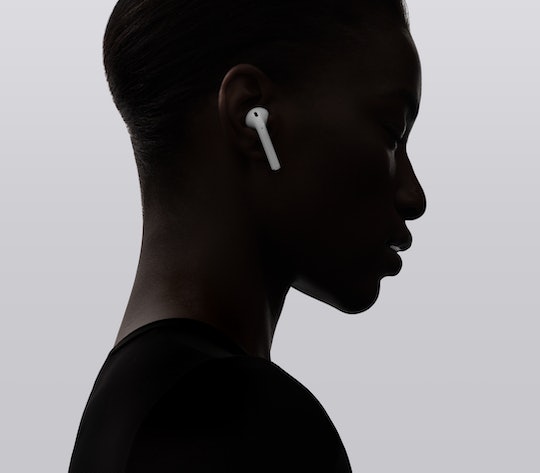 At a much-hyped San Francisco event Wednesday, Apple announced its newest iPhone, and everybody is freaking out — about what it doesn't have. Sure, the iPhone 7 will boast the longest battery life ever, an upgraded camera, a totally redesigned home button and water resistance when it drops Sept. 16, but the company also gave the beloved earphone jack the axe. That means that unless you want to party like it's 1999 and use an adapter for your wired buds, you're going wireless. But the ones that Apple designed for you are small, and there's two of them, and at a price of $159, they're damn expensive, all of which indicates that they're going to go missing instantly. The internet immediately noticed, and the funniest iPhone AirPod tweets suggest that there's nary a responsible adult among us.

Apple seems to be pretty psyched about unveiling its controversial AirPods, which will be available in late October. "It all comes down to courage," Apple Vice President Phil Schiller said in explaining why the company decided to go wireless. For customers, though, it may take all our fortitude, bravery, and brain power just to keep track of them. And we will want to hang onto them: For the hefty price tag, Apple promises to deliver a product that instantly syncs to devices, automatically pauses when removed from ears, allows users to talk on the phone, and lives for fives hours of listening on one charge.

When people take them seriously, the AirPods are seem to score some pretty decent reviews:

But the most extreme Apple innovation works if — and only if — its owners know exactly where they are so they can use them. And judging by the many, many reactions posed to social media, there's definitely no guarantee of that:

Some potential AirPods buyers are so sure they can't be trusted with the new product that they're admitting they lost them before they ever owned them:

And the tolls this can take on bank accounts nationwide is real:

Others already have a pretty good idea, in fact, of how they may lose the new gadget to the Upside-Down, in between the couch cushions, or, really anywhere they go:

The search and rescue effort will be intense:

If it's even successful at all:

Some people are hopeful that Apple will at least finish what it started and devise some method to retrieve their sure-to-go-missing AirPods:

Come on, Apple. Having already sold more than one billion iPhones since the product's original inception, you've already pretty much ensured that lots and lots of people will purchase your new iPhone and whatever whacky-seeming gadgetry that accompanies it every year. Helping out the less responsible of your customers is the least you can do.