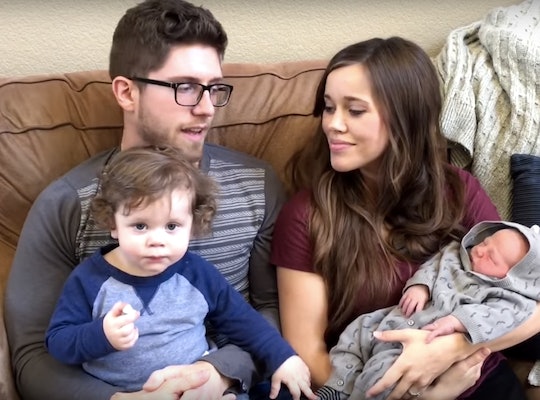 Spurgeon: The Star Of The Seewald Family Videos

There's no shortage of Duggar content on the internet and on TV, with the mega-family's immensely popular reality series 19 Kids & Counting having spun off into Counting On, starring some of the adult kids. And with one of them, 24-year-old Jessa, growing her family in the public through the show, social media, and the blog she shares with her husband, Ben Seewald, loyal fans can soak up her kids' cuteness whenever they want. A lot of the videos the couple posts are well wishes to family members and serious reflections on their Christian faith, but the funniest Jessa Duggar and Ben Seewald videos star their toddler son, Spurgeon — and it's all but certain that his 1-month-old little brother will soon start making more regular appearances as well.

One of a whopping 19 siblings herself, Duggar has said she'd like to have a big family as well. She and Seewald have been open about their goal of adopting children, and have even joked about having 15 sons. And that's great news for fans of the family, because the couple is enthusiastic about showing off their two boys, milestone by milestone, from some of Spurgeon's first steps to funny bath time hairstyles. They even introduced the newest family member, Henry Wilberforce, to the world via YouTube video just a couple days after he was born on Feb. 6.

So, carefully curated for optimum cuteness, here is some of the funniest family content that the Seewalds have shared so far.

The whole family showed up for the big unveil, and we got the first glimpse or what will certainly be a whole lot of brotherly love to come.

Spurgeon's Ready For His Close Up

Now little more than a year old, the older Seewald brother is a natural on camera. With that face and bouncy personality, he's poised to steal the limelight on Counting On.

Spurgeon learned about gravity when he made himself dizzy and fell down over and over, all while being totally adorable.

Back in December, the Seewald family posted a short video congratulating Jessa's sister and Counting On costar, Jill, and her husband on their announcement that they were expecting again. And Spurgeon was seriously stoked when they mentioned future playdates. Lots of playdates.

Spurgeon's certainly not shy about his musical talents, as he showed when he jammed out with his mom recently.

And he's a model, too! At least he could be, as he showed when he tried on his dad's hat in front of the camera.

If Spurgeon is any indication, his little brother will be just as much of a natural in front of the camera as the rest of the family is.