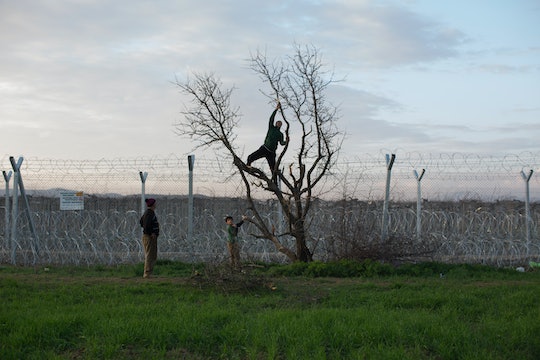 Funniest #ManInTree Jokes, In Case You Need A Good Laugh

So a man climbs up a tree. An 80-foot tree, no less. He's up there, and people are thinking, "Hey that dude should probably get down." Just hanging out in an 80-foot tree seems ill-advised, right? Apparently, the as-yet-unidentified man who decided to climb a tree next to Macy's Department Store in Seattle, Washington didn't think so. He seemed pretty happy to be up there. So happy, in fact, that he was hurling apples at medics trying to help him and generally giving social media some hilarious "Man in Tree" jokes to keep us giggling on an otherwise bleak news day.

According to baffled eyewitnesses, a man was seen about 60 feet up an 80-foot Sequoia in downtown Seattle on Tuesday. The surrounding streets have been closed for hours while negotiators try to figure out exactly how to get the man out of the tree. Nobody seems to have any clear idea why this man has climbed such a massive tree in the middle of a busy street, which probably makes negotiations difficult. Social media has been lighting up with theories, including a pretty brilliant one of my own. Maybe he didn't climb the tree. Has anyone seen The Hangover? Remember when they found Doug on the rooftop? Maybe someone left this guy up in a tree as a prank, how are we to know?

At any rate, take a moment to enjoy some of the finer points of online satire, aimed at a nameless man in a tree who is wreaking traffic chaos in downtown Seattle and is a fan of chucking apples at unsuspecting medics.

This first one is funny on account of all the apple-throwing and the flirtiness. I hope she becomes #WomanInTree and they make a rom-com about the two of them (are you listening, Tina Fey? This could be comedy gold!):

It only got better from there:

Not going to lie, guys... I might want to move to Seattle just a little bit now. #Guywithsword? #ManInTree? You know what we have in my town? #LadyWhoKicksCars. And she's not even fun.

I would also like to endorse #ManInTree for social marketing on LinkedIn. He's doing a better job than basically anyone who isn't a Kardashian right now.

And now this here... this just makes me happy.

If you don't get this joke, you didn't pay close enough attention to The Dark Knight and that means most likely, we can't hang (another Man In Tree joke? Perhaps...).

Want to find more Man in Tree jokes? You can follow "him" on Twitter (@Man_In_Tree). His jokes are sort of the best, anyway:

Thank you, Man in Tree, for filling our social media feeds with a little brevity to break up an otherwise tragic Tuesday. We owe you one.