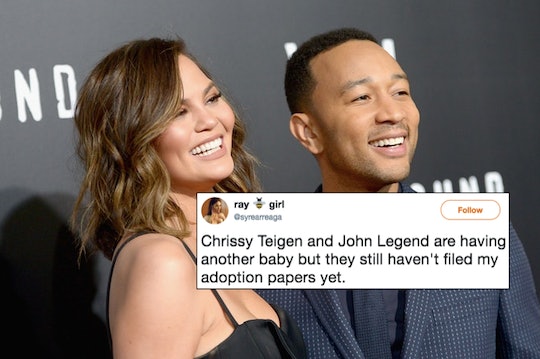 Sometimes, the news cycle can be a cruel mistress. And sometimes, Chrissy Teigen posts something on her Instagram and the world seems beautiful again. Especially when she blesses fans with the news that she is pregnant with baby number two with husband John Legend. Honestly, I think it was too much for fans to handle on the Tuesday before Thanksgiving, because fans had the funniest reactions to Teigen's pregnancy on Twitter. I am loving every, single one. Because we are all in this together, guys.

After months of talking about wanting to have a baby sibling for their utterly perfect 1-year-old daughter, Luna Simone, Teigen finally announced the good news on Tuesday. She and Legend are officially going to be parents of two children. In other words, the world is finally righting itself on its axes and soon enough, everyone will be happy again.

The model and cookbook author, who managed to distract fans from her epic trolling of the recent Victoria's Secret fashion show (honestly, her tweets were definitely better than the show), took to Instagram on Tuesday to share the news of her pregnancy. And she had the cutest sidekick to help her; Luna. In the Instagram video, Teigen points to her belly and asks: "Luna, what's in here?" Luna answers simply, "Baby." Which means she knew before the rest of us, I guess.

Teigen captioned the video "It's John's!" and Legend posted his own comment on her Instagram wall: "Maury will have the final word on this."

And this is why fans love them.

In fact, fans weren't just excited to hear that their favorite celebrity couple was pregnant... they were dying over the news. I blame the anticipation factor, to be honest. Legend and Teigen have been discussing their plans to welcome a second baby since January, when Teigen announced that the two were hoping to welcome a baby via frozen embryo transfer, according to E! News. She even shared the sex of the couple's final frozen embryo (they initially had 20) with fans on Twitter; drum roll please... Teigen and Legend are more than likely expecting a little boy.

A source close to the couple told Entertainment Tonight that the new baby is indeed a boy, and that they couldn't be more thrilled to add to their family:

It’s perfect that they’re sharing the news over Thanksgiving, because they are incredibly grateful to be adding to their family!

It seems the Teigen/Legend family aren't the only ones to be feeling grateful about welcoming their new baby.

Some fans might have been happy for the couple, but they were feeling a little down that they weren't included in the glorious news. For instance, some people might have been hoping that the cutest couple in the world might adopt them.

There are some fans who are just super pumped at the idea that they happen to be pregnant at the same time as Teigen. Because imagine showing up to your Mommy and Me class and she is sitting there in all her splendor.

Finally, some fans checked their Twitter feed, saw that John Legend and Chrissy Teigen were trending... and nearly had heart failure, worrying that they might be divorcing or something. You can just imagine their excitement that the news is good news, for once.

Once the news sank in, fans turned to possible baby names.

So that's it, folks. The internet has offered up its feelings on the impending birth of yet another perfect little Teigen/Legend baby, and no one is surprised that people are out there weeping real tears of joy. Because the end of 2017 is drawing near, and everyone needed a little good news. What could be better than this?