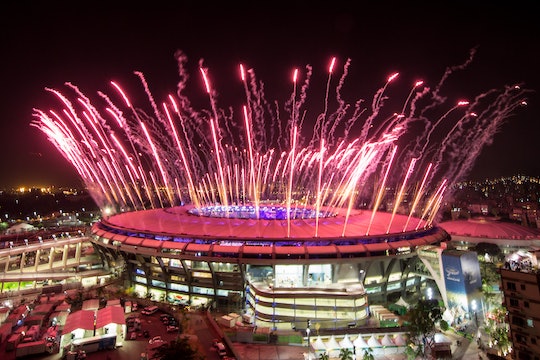 The Summer Olympics are finally here, and along with them we can expect jokes of all variety on Twitter. Whether spot-on, off-color, or outright hilarious, there will be plenty to entertain you during commercial breaks (and there will be more than enough of those). Indeed, the funniest Rio Olympics opening ceremony Tweets quickly reminded us that humor, much like athletics, crosses cultural barriers.

The Rio Olympics are beset by two sources of unfortunate humor, and those are Zika and polluted water — neither are particular funny, of course, but international concern about both often comes out in the form of jokes, almost as a way to cope with the frustrations. Many hypothesized that some athletes would forgo the Olympics altogether for fear of contracting Zika, a virus that has been linked to serious birth defects in the infants of pregnant women who contract it. As it has turned out, many athletes indeed decided to skip Rio, but according to Forbes, most are athletes who didn't have a chance of winning anything anyway, in terms of both medals or sponsorship money.

The variety of problems plaguing the Rio Olympics recently inspired the aptly-named Twitter Hashtag, #RioProblems. In the days leading up to Friday's opening ceremony, #RioProblems ranged from the funny, like references to toilets not working in the Olympic's villages, to the serious, like pointing out the poverty in Rio. And, of course, there were the Zika references, like this Tweet imagining the Olympic cauldron as a giant citronella candle:

The opening ceremony began with a deluge of waves (literally) and an intense, neon-green laser show — a visual spectacle that immediately prompted a humorous backlash, such as a zinger from this Tweeter, who represented her reaction with an expressive GIF:

The performance continued with visual metaphors for Brazil's history, which inevitably led to a representation of the early sixteenth-century Portuguese colonization of the country. This Tweeter immediately pulled through with a sardonic colonization joke:

The ever-observant Twitter-verse continued to comment on the generally colorful nature of the spectacle, including this Tweeter, who likened the ceremonies to the Cirque du Soleil:

Despite the visual splendor, though, the ceremony wasn't exactly fast-paced (are they ever?), hence this Futurama Tweet:

Throughout the ceremonies, it was difficult to not notice the ubiquitous focus on climate change and deforestation. And who better than Paul Dellegatto, a meteorologist for Fox13 in Tampa, to note the troubling irony of criticizing climate change in a city known for pollution:

This Tweeter, meanwhile, had a more... graphic version of the same message:

... And this Tweet nailed it by observing that Republicans in the United Sates might be made uncomfortable by this unapologetic treatment of climate change as, 'ya know, a real thing.

Climate change jokes had a good showing, but nothing — and we mean nothing — was lampooned more than NBC's infuriating commercial breaks. This astute Tweeter noted that NBC also stands for 'nothing but commercials.'

From climate change to Zika, there were certainly enough #RioProblems to go around, but this Tweeter had an unexpected treat in their Rio taxi cab, so it's all good.