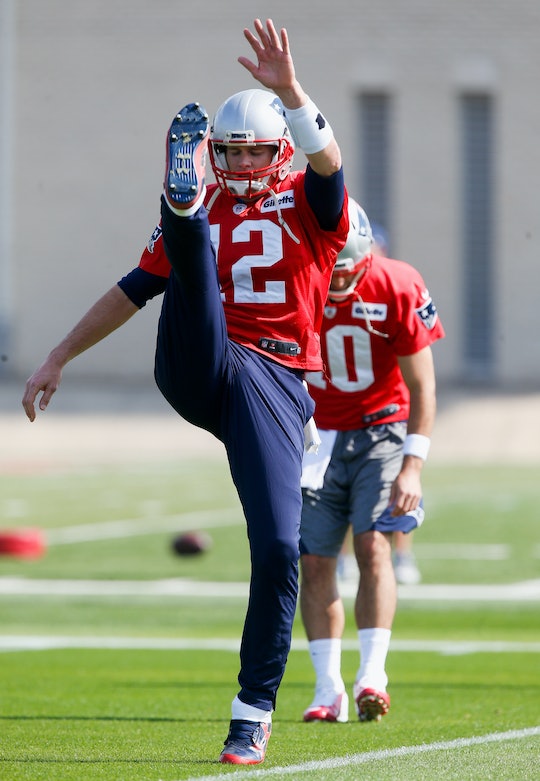 Super Bowl 51 is officially here, and it's basically a second Christmas for Falcons and Patriots fans. Of course, the internet wasn't going to be left out of the festivities, and the Super Bowl memes are quickly taking over your social media feeds. But if you're a Patriots fan that needs to laugh right now or a Falcons fan who wants to poke some fun at the New England quarterback, the number of funny Tom Brady memes are sure to help.

Why Tom Brady? Come on, the guy's got some fodder for sure. Whether you're talking about Deflategate, the hero worship New England has for him, or the giant coat he wore at the AFC Championship Game, Brady can garner a couple of laughs. Plus, most of the country is hoping he bites it in Super Bowl 51, so that's kind of funny, right?

OK — I won't be rude. The truth is Tom Brady is a sore spot for a lot of people, but he's also got an incredible fan base. So no matter which side you're on, these funny Tom Brady memes can help get you through Super Bowl 51. As for if they'll help Bill Belichick, I have no idea. (Yes I do — no, they won't help him.)

Memes seem silly — I get it. But some would wager that sports are, too. The thing is, sports can bring people together, especially during the past 12 months. It's been one hell of a year and 2017 hasn't exactly had a great start so far. If that means for one Super Bowl game everyone can pull together to laugh at Tom Brady, then let's go for it, right?

This is the thing about sports and memes — they're worth sharing with everyone. It's a common interest between people. Strangers on Twitter can share memes and explode over a touchdown during the game and they can egg each other on when their team is under pressure and the two minute warning is sounded. They're fun to create when you're in the middle of a close game and they're fun to share when you just don't have the words to explain how you're feeling. I know, who knew memes were so worthwhile?

And when that meme is also Tom Brady? Everybody wins. Because whether you love him or hate him, everyone can agree — he makes some pretty hilarious faces when he's in the middle of a throw.