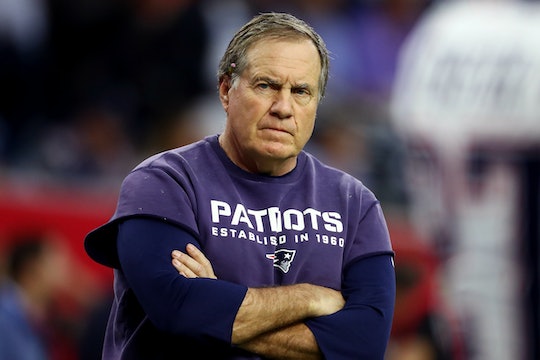 Bill Belichick's RBF Is The Star Of Super Bowl 51

The big game tonight may be between the Falcons and the Patriots, but there are so many funny tweets about Bill Belichick's resting bitch face at Super Bowl 51 that it's obvious what the internet is concerned about — Belichick's fierce expressions.

OK, fierce isn't exactly the best word. In fact, it's more like terrifying. Belichick is known for having some emotionless expressions, but during Super Bowl 51, you'd think he'd be a little more pumped and excited for his team. Instead, his resting bitch face seems to be even more intense than usual and the internet noticed. Is he mad that Julio Jones of the Atlanta Falcons is a beast? Is he angry that Tom Brady hasn't made any huge plays yet? Is he just hangry and waiting for half time so he can get a damn hot dog already?

According to Boston.com, it's not that the head coach of the Patriots and four-time Super Bowl champ is mad — it's just that his RBF is a natural part of his persona. In fact, the B in RBF could stand for Belichick — he's known for not being a smiley guy or someone who shares his expressions through his cheek bones and facial muscles. Instead, he seems to save up his smiles until the Lombardi trophy is back in New England's grasp or Tom Brady is kicking serious ass at practice.

But when you're up against the NFL MVP Matt Ryan and his Atlanta Falcons, maybe your resting bitch face is more than just your standard expression — it's a way of hiding your fear, anxiety, and trepidation. (Ahem. Go Falcons.)

No matter which way this game goes, it's obvious that Belichick is just going to keep that RBF for the entire Super Bowl. If Brady scores another win for Belichick, maybe the world will see a smirk or two. But otherwise, he can keep his resting bitch face and Twitter can explode about it. Seriously, if there's any Super Bowl meme worth retweeting, it's the hilarious tweets about Belichick's resting bitch face. How can one man have so little expressions? Maybe it should be called Belichick's resting Botox face. I'm not entirely convinced that he's not a figurine from Madame Tussaud's walking around trying not to melt in the Houston stadium.