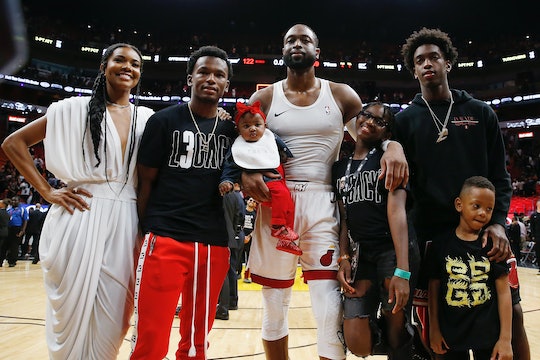 Shortly after former NBA pro Dwyane Wade opened up about parenting an LGBTQ child on The Ellen DeGeneres Show, his wife Gabrielle Union introduced Zaya, their transgender daughter, to the world with a lovely video on Twitter. "Meet Zaya," the actress shared with her followers. "She's compassionate, loving, whip smart, and we are so proud of her. It's OK to listen to, love, and respect your children exactly as they are. Love and light good people."

Earlier this week, Wade shared with Ellen DeGeneres that his 12-year-old daughter, who was born Zion, came out as transgender and asked her parents to now call her Zaya and refer to her with she and her pronouns. Wade also shared with DeGeneres that Zaya told her parents, "Going forward, I am ready to live my truth."

In the touching video shared by Union on Twitter, Zaya chats with her dad about why people might be hesitant to live their truth. "Because they're afraid they will be judged, I would say, you know, don't even think about that," she says. "Just be true to yourself because what's the point of being on this earth if you're going to try to be someone you're not? It's like you're not even living as yourself. It's like the dumbest concept to me."

"I know it can get tough," Zaya goes on to say, "definitely, but I think you push through and be the best you...but in hard times, you gotta push through. It's worth it, I feel like it's very worth it when you reach that point of yourself."

Folks on Twitter are applauding the 12-year-old for being so true to herself. "Zaya is a remarkable young woman with such an insight on life," Massachusetts Sen. Elizabeth Warren tweeted. "Bruce, I, and our entire team are inspired by her. We're sending all our love and support. Thank you for being such incredible parents — I know that's the future you want for all our kids."

"Yes. Yes. Yes. Zaya — thank you for being unconditionally you!!" California Gov. Gavin Newsom wrote on Twitter. "You inspire so many across this country (and across this world) to live their lives out loud. Never stop speaking up and speaking out."

Zaya's older brother Zaire also shared a heartfelt Instagram post in support of his sister. "Man, I remember bugging my mom as a kid telling her I wanted a brother so bad," he wrote. "I was the only child looking for company and someone to look after and take care of. I have been blessed to have my best friend, Zaya, with me for 12 years. We did everything together...we fought, we played, we laughed, and we cried. But the one thing we never did was leave each other behind..."

Since sharing the video, Union thanked her followers on Twitter for standing by her and Wade's side as they learn more about parenting their transgender daughter each day. "This has been a journey," she wrote. In addition to Zaya, Wade has two other children from previous relationships — 18-year-old son Zaire and 6-year-old son Xavier. He and Union also share their 1-year-old daughter, Kaavia.

"We're still humbly learning but we decided quickly with our family that we wouldn't be led by fear. We refuse to sacrifice the freedom to live authentically because we are afraid of what people might say. You have the ability to learn and evolve. Try that s***," Union wrote. "Also, the tremendous support we've received is amazing and hopefully inspires more folks to center, support, love, and protect the most marginalized of us."

More Like This
Kaavia James Obviously Had A Shady Response To Letting Her Mom Be Elsa From ‘Frozen’
Drake Shared A Photo Of His New Face Tattoo & It's A Sweet Tribute To His Mom
Anne Heche Remembered As "Loving Mother" To Her Two Sons After Her Death At 53
Dan Levy Just Proved He's The Ultimate Uncle With This Perfect, Sweet Answer