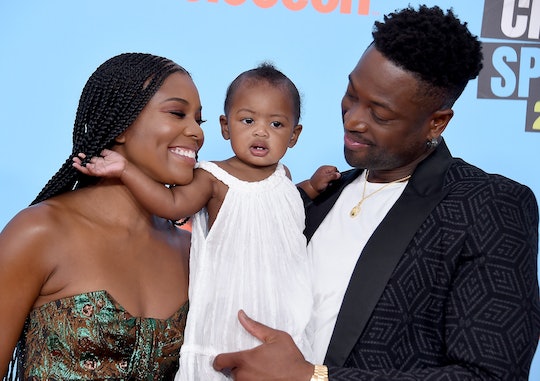 Dwyane Wade and Gabrielle Union are both super successful people, this we know for sure. She is a popular, well-respected actress while he was one of the top players in the NBA. But despite all of their fame and success, they are still just two regular parents hanging out with their kid in the kitchen... as evidenced by Gabrielle Union's Instagram video of Wade playing basketball with baby Kaavia in his robe and slippers.

The couple are parents to four children; Wade's three sons from a previous relationship: Zaire, 17, Zion, 12, and Xavier, 5, as well as 1-year-old daughter Kaavia. Now some of their fans might recognize Kaavia by another moniker, "Shady Baby," since she has a bit of a following for being hilariously expressive ever since her birth. She even has her own Instagram page with more than 980,000 followers. Don't worry, though, she's not letting all of that fame go to her head. And neither are her parents. On Thursday Union shared a video of the family having a little play time over morning coffee. Wade, dressed in his robe and slippers, challenged Kaavia to a little one-on-one basketball game with a pink fuzzy ball. Union noted that one of the players might have been slightly more invested than the other when she captioned the video, "Clearly @dwyanewade misses the game & @kaaviajames defense proves she's ready for the NBA. #NoDefenseIsTheBestDefense. Morning with the Wades."

Perhaps one of the best things about this video is the fact that Wade sort of looks like he is really putting in effort while Kaavia is not. Also his robe and slippers combo is pretty great.

Wade retired from the Miami Heat back in May after more than 1,000 regular season games in his career, as per USA Today. It makes sense that he would want to share a little something of such a big part of his life with his kids. Just like Union wants to share her own career with her daughter. Like when she and Kaavia dressed up in matching Clovers cheerleading uniforms from the iconic movie Bring It On for Halloween.

Dwayne Wade and Gabrielle Union are just like you and me. Hanging out in the kitchen in their robes with their kids in the morning. Goofing around and playing ball. The only difference being that Wade might be slightly better at basketball than the average dad in his robe.