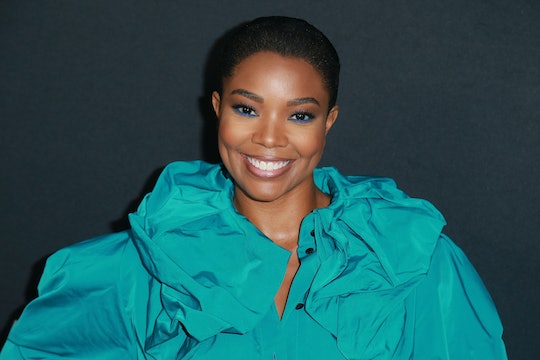 Gabrielle Union Defends Family Photo Amid Criticism: "It Looks Like Love To Me"

Every parent has a choice to make as their kids get older. They can either attempt to fit their child into some predetermined box of who they think they should be, or they can embrace the people they're actually meant to become. It seems like a pretty simple choice, but of course, it's not always easy. Or at least, it's not always easy for other people to understand. In the case of parents extraordinaire Dwyane Wade and Gabrielle Union, however, I suspect it's as easy as breathing. Case in point: Gabrielle Union's response to a recent comment on her family photo made it clear that exactly one thing really matters in their household: that their children know they are loved. And it's a beautiful thing.

The Bring It On actress and her husband, NBA star Dwyane Wade, are busy raising three children, 17-year-old Zaire and 11-year-old Zion (Wade's children from a previous relationship), and of course, 11-month-old daughter Kaavia, aka the #ShadyBaby. And recently, Wade shared a photo on his Instagram Story of Union embracing Zion and Kaavia with the caption, "My Girls," with at least two people in the photo smiling.

Spoiler alert: Kaavia was not one of those people because as Union has pointed out many times, she's all about the shade. LOL.

Anyways, it seems someone took umbrage with the photo and the caption, perhaps because Zion might identify as female and I guess they don't like that? Whatever the reason, someone shared a screenshot of the photo on Twitter with the caption, "What y'all think of this?" Ugh.

People seemed to have a lot of opinions. Some felt like it was their right to chime in about gender identification, and whether Wade should be supporting his child. Others applauded the basketball player's open acceptance of Zion, as one Twitter user wrote:

Mind your business and let him be a father to his kids and husband to his wife. It doesn’t matter what anyone thinks. These kids are being raised with unconditional love, something many of us weren’t raised with. Surely y’all don’t want anyone to tell you how to raise your kids.

Do you know who else had an opinion to share about the photo? Gabrielle Union herself, who was not willing to allow any negativity to mar her family's loving photo. She retweeted the photo with the caption: "Looks like love to me. I truly hope that everyone gets the love, support and hugs they deserve. Also Kaav ain't with the dumb sh**. Peace & Blessings good people."

This isn't the first time Wade and Union have come to Zion's defense. When Zion and Union attended the Miami Pride Parade together back in April, Wade spoke to Variety about his role supporting his child, stating, "I don’t really talk about it much because it’s Zion’s story to tell. I think as a family, we should support each other. That’s our job. And my job as a father is to facilitate their lives and to support them and be behind them in whatever they want to do."